AirAsia’s shares gained 3.2% yesterday, ahead of the release of the carrier’s financial results, due out today (20-Nov-2009). CEO, Tony Fernandes, stated the carrier is “happy with the result” for 32009, which is traditionally the weakest quarter for the airline.

Meanwhile, Mr Fernandes, in an interview with Malaysia's Business Times, stated the carrier plans to list itself on both Thailand and Indonesia’s stock exchanges, including a dual listing in Thailand, as part of plans to develop a single ASEAN airline identity.

According to CEO, Tony Fernandes, “the plan is to list AirAsia group in Thailand and later on in Indonesia. The performance of both associates is dramatically improving and we are working on a suitable structure to inject them into a common share”. He added, “it's still too early to provide details on when and how many shares will be floated. But we are looking at issuing new shares”.

AirAsia's share price has gained 52% since the start of 2009, outperforming the 45.4% rise in the broader market index.

In other finance news, Tiger Airways is reportedly considering launching an IPO of at least USD500 million, or 20% of its share capital, in 2010, to fund expansion plans in Australia and purchase new aircraft.

Virgin Blue CEO, Brett Godfrey, in an address to the Queensland Media Club yesterday, stated he believes the market has bottomed out, with the carrier planning to provide a market update at its AGM next week.

In the Indian market, Jet Airways, Kingfisher and SpiceJet all experienced share reductions yesterday, of 3.2%, 3.8% and 4.6% respectively.

Also yesterday, the Indian Ministry of Civil Aviation reported the carriers’ profit/loss for FY2008/09, with the three listed Indian airlines all reporting losses in the 12 month period, of USD86, USD343 and USD75 million, respectively. 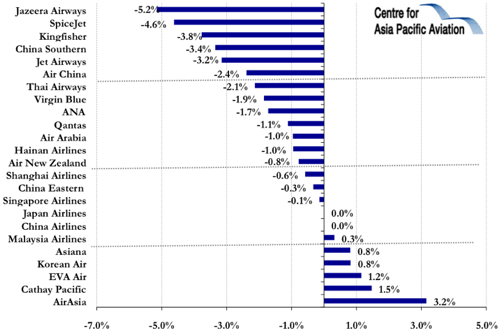