Meanwhile, analysts have stated that Firefly could become the lowest-cost operator in the Malaysian market upon the delivery of new B737-800 aircraft. Firefly will configure its B737-800 aircraft with 189 seats, nine more seats than AirAsia’s typical A320 configuration.

AmResearch Sdn Bhd, quoted by The Star, commented: “Our back-of-the-envelope calculation suggests that Firefly’s unit cost will likely be 5% lower than that of AirAsia’s at 11.2 sen. This is purely coming from a higher seat count per aircraft, all else being equal." The company, however, added: “Investors are better off with AirAsia for exposure to LCC play given its far superior route network and fleet size, which enables it to better tap the growing regional demand and provides it the critical mass to enable it to capitalise on ancillary initiatives.”

HwangDBS Vickers Research and ECM Libra Investment Research in separate reports added that lower than peer unit costs would be achievable with the carrier likely to ride on MAS’ existing infrastructure and resources.

Shares in Singapore Airlines declined 1.2% yesterday. The stated it would change the engines on three of its A380 aircraft following an engine blowout last week on a Qantas flight. The aircraft are expected to be out of service for one to two days. The carrier described the engine change as "precautionary, as advised by Rolls-Royce" after finding “slight” oil staining in areas of the engines

Among the gainers, shares in Korean Air and Asiana gained yesterday being among the strongest gainers in the South Korea stock market that traded modestly higher on Wednesday.

China Southern shares closed up 3.5% yesterday with China Eastern shares 2.5% stronger with airlines taking the lead among the stock gainers yesterday in a day which saw the Shanghai Composite Index decline d0.6% and the Hang Seng Index close 0.9% lower. 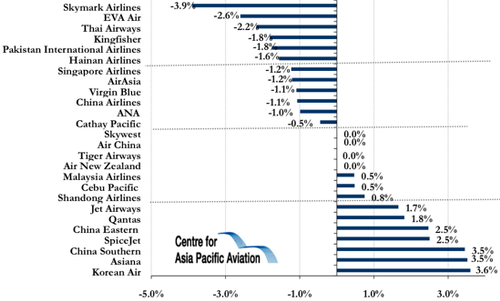