Stocks of the major LCCs were mixed on Monday (29-Jun-09). In the Asia Pacific region, AirAsia's shares slipped 1.7% on Monday, following a 1.7% reduction on Friday. The carrier yesterday released its 2008 Annual Report, with the LCC emphasising that demand for its services “remains robust” with the carrier enjoying a “high success ratio” for its new routes.

AirAsia also stated ancillary business remains strong, growing 73% year-on-year in 2008, and enabling the carrier to maintain its fare competitiveness. CEO, Tony Fernandes, added that the Asia Pacific aviation industry is “facing one of the most challenging period since the 1997 Asian financial crisis”, although this environment has benefited the LCC, with the carrier's market share likely to grow further in 2009, “partly because much of the rest of the industry is in acute distress”. [Download AirAsia's Annual Report]

Also in the Asia Pacific region, Virgin Blue shares remained stable, following the release of the carrier’s May-2009 traffic results. The carrier, which stated it expects the economy to recover over the new few months, reported a 5.1% increase in passenger numbers in the month, with load factors slipping just 0.1 ppts, to 72.4%. The carrier has also reportedly been canvassing investor support for plans to issue new shares to raise fresh capital, although such a move is unlikely, given the airline's weak share price and past unwillingness by Sir Richard Branson to invest more funds into the carrier to maintain his current interest.

Among the major European LCCs, easyjet shares were down 0.1%, while Air Berlin shares were stable and Ryanair gained 1.7%, in line with overall improvements in European markets.

In the Americas, Allegiant shares jumped 8.3%, with Southwest up 1.7%. 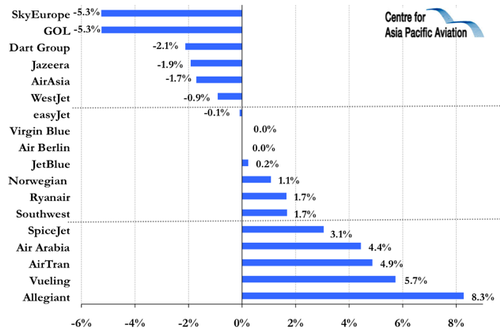