AirAsia’s share price gained 6.7% yesterday, as the market continued to react positively to the carrier’s positive first quarter earnings report, a stock upgrade from OSK Research (from “neutral” to “trading buy”) and the extension of the carrier’s tax allowance by the Malaysian Government.

The allowance means that 60% of AirAsia’s qualifying capital expenditure incurred from 01-Jul-2009 to Jun-2014 will enjoy permanent tax savings.

Also gaining yesterday was Virgin Blue, with a 7.1% gain (following a 6.6% fall on Wednesday and a 7.6% reduction on Tuesday).

Royal Bank of Scotland commented that, following a meeting with new Virgin Blue CEO, John Borghetti on 03-Jun-2010, it remains “underwhelmed, given the short-term challenges facing the business”. RBS added that it expects profitability to remain “challenged” over the next 12 months, adding, “we believe short-term momentum is against the stock and may push the share price lower”. However, on a more positive note, RBS commented, “we don’t view the business as a going-concern risk”.

Also in the Australian market, shares in Qantas gained 2.4%. Merrill Lynch has maintained its “buy” rating on Qantas, with a target of AUD3.00, but warned that Qantas, like Virgin Blue, is suffering in the current market conditions, but noted it is "far less exposed" with its Jetstar product. 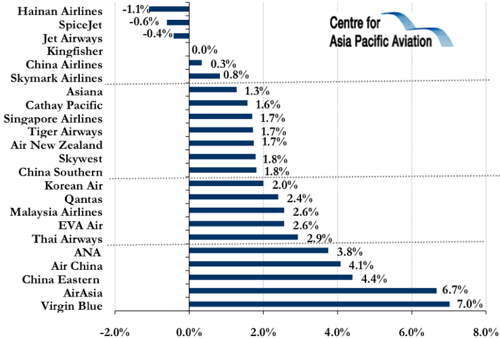