Jet Airways shares declined 2.8% to INR860.4, Kingfisher Airlines declined 1.6% to INR70.4 and SpiceJet was 2.6% weaker after the Civil Aviation Ministry stated “predatory pricing” by some carriers would not be justified. The government is considering action against such moves.

In Hong Kong, shares in China Eastern gained 0.2%, China Southern strengthened 1.3% and Air China increased 0.4% yesterday. Shares in the airline sector were stronger than the broader market yesterday on expectations that a stronger Yuan would reduce the cost of imports such as aircraft purchases. Hainan Airlines gained 4.1% after media reports that Hainan is set to implement a tax rebate for foreign tourists from 2011.

Morgan Stanley, in a research report, stated that since its low of HKD7 in Jun-2009, Cathay Pacific's share price has more than tripled, significantly outperforming the local market. Cathay Pacific's operating and net profit could peak this year, according to Morgan Stanley which added that the sharp rise in the share price reflects the bullish earnings outlook. Morgan Stanley maintained its "equal-weight" rating for the stock and raised its price target by 6% from HKD22.65 to HKD24. Meanwhile, the carrier stated it plans to increase passenger capacity by 11% in 2011.

Shares in Skywest Airlines added 5.6% yesterday. The Western Australian Government last week selected Skywest as the preferred proponent for a further license of five years for continuing air services for the regulated proportion of the coastal network. 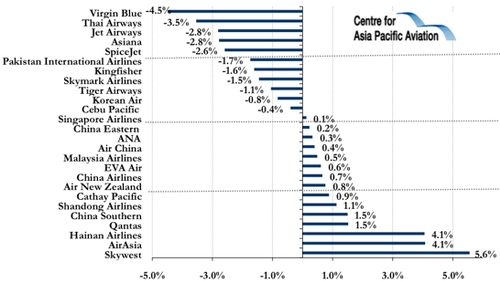