Asia Pacific airline shares were mixed on Friday, with AirAsia (-3.0%) and Malaysia Airlines (-2.5%) leading stocks lower, reflecting further weakness on the Kuala Lumpur Composite Index, which dropped below the psychologically important 1,300-mark to close out an unconvincing week.

In Australia, Qantas was flat while Virgin Blue rose 2.1%

Korean Air (+0.2%) and Asiana Airlines (+0.6%) were up marginally, while Chinese airline stocks continued to soar, led by China Southern (+4.7%) and China Eastern (+4.2%). China Southern is now up over 19% since its share suspension was lifted just ten trading sessions ago.

Air China gained 1.4% on Friday. According to Bloomberg, the carrier plans to invest CNY682.1 million yuan (USD100 million) into Shenzhen Airlines to increase its stake from 25% to 51% in the Pearl River Delta-based airline. See related reports: 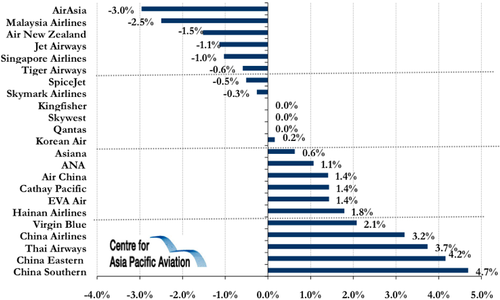