AirAsia CEO, Tony Fernandes, stated the carrier is “actively” looking at the possibility of paying dividends, stating: “We are in a much better position (than last year) to be considering a dividend”.

He added: “We have solved a lot of uncertainty within AirAsia. Now we have reached the stage where the board will actively look at it”.

The LCC has not had a dividend policy since it was listed on the Malaysian Stock Exchange in 2004, previously stating it wanted to reinvest profits for future capital requirements. Mr Fernandes also confirmed plans to offer 30% of its Indonesian and Thai units to the public in listings in their respective stock exchanges in 2011.

Also in Malaysia, Malaysian Airlines System Employees Union (MASEU) has called on Malaysia Airlines to cancel its A380 orders, stating that by the time MAS takes delivery of the A380s in 2012, the aircraft will be "outdated". It also added that the carrier needs to adjust its business strategy and avoid making the same mistakes as other airlines in the region.

The carrier has previously threatened to cancel its A380 orders if delivery delays persist. Malaysia Airlines CEO, Tengku Azmil Zahruddin, stated the carrier would "not rule anything out at this stage".

Elsewhere in the region, shares in Qantas gained 0.4%, while Cathay Pacific and Singapore Airlines fell 0.1% and 0.7%, respectively yesterday. 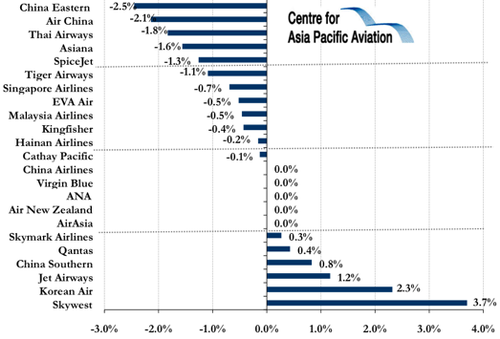