Air Seychelles expands aggressively in 1H2013 in a transformative year

Air Seychelles announced a strong second quarter and half year financial performance as its turnaround strategy begins to deliver results. The carrier stood on the brink of collapse in 2011 before Etihad came to the rescue by taking a 40% equity stake.

Since its partnership with Etihad took effect in Jan-2012, a considerably slimmed-down Air Seychelles has demonstrated strong growth as it works to re-establish an international network through an increasing number of codeshare partners.

Air Seychelles forecasts that it is on track for a second year of profitability after reporting a USD1 million profit for the financial year to Dec-2012, having lost USD12.5 million in 2011.

Air Seychelles’ CEO, Cramer Ball stated: “We are creating a solid foundation for the future of our airline, Seychelles tourism and our home economy, and we are on track for a second year of profitability”.

“We achieved triple digit growth in the second quarter of 2013 – a tremendous result and further evidence of the success of our strategy. At the beginning of the year, we committed to the further development of our network through organic growth and partnerships and we have delivered on that promise,” Mr Ball said

An expanded codeshare agreement with equity partner Etihad and new codeshares with airberlin, Czech Airlines and South African Airways has significantly increased revenue and accounted for 34% of total revenue in 2Q2013.

During the first half of 2013 Air Seychelles took delivery of its second A330-200 allowing the carrier to expand international services on capacity increasing 140% to 335.7 million available seat kilometres (ASKs) in 2Q2013. Demand increased 207% to 187.1 million as measured by revenue passenger kilometres (RPKs) which will have led to higher load factors.

The additional aircraft has allowed Air Seychelles to increase services to Johannesburg, Mauritius and Abu Dhabi, and launch services to Hong Kong, effectively doubling the carrier’s weekly international services from eight in 2012 to 16 during the half year.

Air Seychelles chairman and Minister for home affairs and transport, Joël Morgan, stated: “The half-year performance of our national airline has exceeded expectations”.

Air Seychelles’ partnership with Etihad and codeshare agreements with other carriers has increased Air Seychelles' exposure to international markets leading to record 131% growth in the number of tourists arriving on the archipelago on the carrier compared to a year ago.

Air Seychelles expanded its codeshare agreement with Etihad Airways to include Dublin in Apr-2013 followed by Melbourne and Sydney in Jun-2013, bringing to 23 the number of codeshare destinations served by the two airlines via Abu Dhabi.

Tourism from Britain and Ireland to the Seychelles grew 18% in 1H2013 to 5,941 compared to the first half of 2012. While Irish visitors accounted for just 231 of that number, this market barely existed in 2012 when just 14 arrivals were recorded in the first half of the year.

Australia also accounts for only about 1,100 visitors to the Seychelles each year but the country is home to the largest Seychellois diaspora in the world which Air Seychelles will look to tap.

During the first half of the year Air Seychelles also signed codeshare agreements with airberlin linking Berlin and Dusseldorf over Abu Dhabi, as well as with Czech Airlines to Prague via Abu Dhabi. Overall, the European market has grown about 14% since 2012.

The first phase of what is intended to become a more extensive codeshare agreement with South African Airways was signed in Apr-2013. South Africa is a major market for the Seychelles accounting for more than 12,300 visitors in 2012. SAA has placed its code on Air Seychelles’ direct services between Mahe and Johannesburg. SAA will also place its code on Air Seychelles flights between the two largest islands of the Seychelles, Mahe and Praslin, but this is still awaiting regulatory approval.

It was intended that the codeshare agreement would also be extended to include SAA’s domestic network from Johannesburg, but this is also yet to occur.

See related report: South African Airways codeshares with Etihad and Jet have mutual advantages for all - except Star

The Seychelles has expanded and signed 15 air service agreements, including with Hong Kong, Australia, the Czech Republic, Kuwait and South Africa since Dec-2012. In Aug-2013 the country signed an ASA with Vietnam and Mr Morgan said “dozens more agreements are in the pipeline” to ensure the national carrier can expand its codeshare network and improve air access to the Seychelles.

As part of a major restructuring in 2011 Air Seychelles all but abandoned its long-haul network in favour of focusing on regional services. Services to all three Asian destinations launched in 2010 and 2011 were suspended as well as operations to Europe, including London, Rome and Milan in Jan-2012.

Air Seychelles launched three times weekly services to Hong Kong in Mar-2013 via Abu Dhabi with its own metal and Etihad as a codeshare partner. Efforts to establish a partnership with Cathay Pacific to provide greater traffic feed from its Chinese network are still to materialise, despite hopes that an agreement might be announced in Apr-2013. 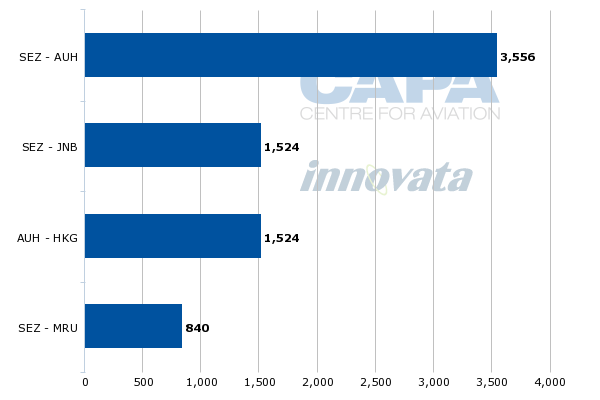 Air Seychelles' cargo business has also been boosted by the arrival of the A330-200s and the new through-service connecting Johannesburg to Hong Kong via Mahe and Abu Dhabi as well as the development of markets in Paris and Milan. As a result cargo volumes carried in 2Q2013 increased by 283% to 1.6 million tons compared to the same period in 2012.

Air Seychelles operates about 120 flights per week on its only domestic route between Mahe and Praslin Island using DHC-6 Twin Otter aircraft.

Air Seychelles' passenger numbers on the route grew by 20% to 38,397 in 2Q2013. A significant component of the increase was the 22% rise in residents using domestic services in the quarter taking their number to 16,891 and accounting for 40.7% of traffic.

The improved domestic performance was attributed to an increase in capacity at peak times to cater for higher demand for inter-island travel which is reflected by an 18% increase in visitor traffic for 2Q2013. Air Seychelles plans to invest further in its domestic network and services to further grow revenue.

The carrier has a DHC-6-400 on order for delivery in 2013 according to the CAPA Fleet database.

Air Seychelles is leveraging its Etihad partnership, but a new one with Cathay Pacific needs to be finalised

In a transformative year, Air Seychelles, under the guidance and financial assistance of Etihad, is well on the way to establishing the basis for a sustainable national carrier which is central to the growth of the Seychelles tourism industry and the archipelago’s economy.

In doing so, it has taken a leaf out of the Etihad’s handbook by picking strategic partnerships to build a largely virtual long-haul network to its major tourism and growth markets.

However, for Air Seychelles to maximise the benefits of its Hong Kong service it needs to gain access to mainland China and finalise a codeshare agreement with Cathay, something that is taking considerably longer to do than expected. Similarly, development of the partnership with SAA beyond Johannesburg appears to have stalled.