Private charter and leasing company, Air Partner, has given a gloomy picture of the high-end private leasing market.

Reuters reports that the company stated that the weak demand and pricing environment seen over the first six months of 2009 has continued in second quarter of its financial year. Forward visibility “remains low, in line with the sector and management's expectations during the current global downturn”.

Air Partner traded flat yesterday, although some other lessors had more positive days. Babcock & Brown Air gained 1.7%, while AeroCentury, which focuses on regional aircraft, was up 2.7%. The company announced on 07-Dec-2009 that its Board adopted a Rights Agreement under which its stockholders will receive a dividend in the form of preferred stock purchase rights.

Major aircraft manufacturer, Embraer, stated it expects low levels of civil and business aircraft ordering in 2010, but is hoping that a strong Brazilian market can help it recover some of the lost revenue. The manufacturer expects USD500 million in sales in Brazil in 2009, accounting for about one seventh of total revenue.

The company expects revenue to be cut by 10% in 2010, although fewer order cancellations are expected. Demand is not expected to properly bounce back until 2011.

In positive news for Embraer, United Airlines CEO, Glen Tilton, stated the manufacturer will be invited to join a 2010 tender for narrowbody aircraft for the carrier. United currently operates 150 A319 and A320 narrowbodies. Embraer’s share price dropped 0.5% yesterday, while EADS was down 1.0% and Boeing lost 0.3%.

Meanwhile, parts manufacturer B/E Aerospace had a second consecutive negative day, down 0.6%. The stock was downgraded from "buy" to "hold" by Stifel Nicolaus on 08-Dec-2009, and lost 4.8% on Tuesday. 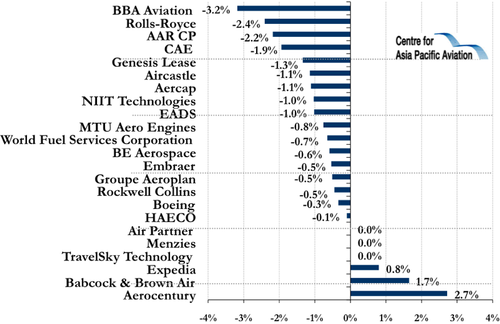