Air New Zealand’s yields pick up in Dec-2009, but remain in negative territory

Air New Zealand handled 2.6% fewer passengers in Dec-2009, as the carrier slashed capacity (ASKs) by 11.0% and demand (measured by RPKs) fell 5.6%, increasing Group load factors by a notable 4.8 ppts. Group yields last month fell 5.2% year-on-year (the smallest fall since Jun-2009), compared to a financial year-to-date (six months to Dec-2009) reduction of 9.7%, indicating some improvements are being seen by the carrier. 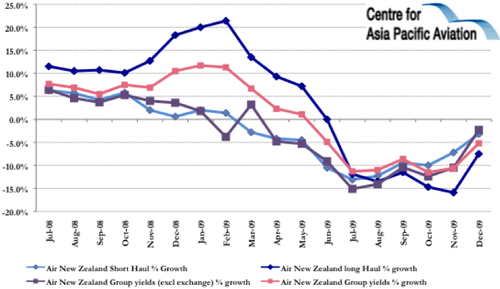 Short-haul yields are continuing to recover from their Jul-2009 floor to be down 3.2% year-on-year last month (and for the smallest year-on-year reduction since Mar-2009), reflecting significant changes in the airline’s operations in the segment.

Domestic capacity was reduced by 5.4% last month, while Tasman/Pacific capacity was slashed by 12.9% primarily through downsizing to smaller aircraft, reduced frequencies on some sectors and the withdrawal of trans-Tasman flights from Hamilton and Dunedin. This resulted in the load factor increasing by 6.6 ppts to 81.6%.