Air New Zealand handled 0.6% fewer passengers last month, while demand measured by RPKs fell 3.7% as capacity was slashed by 10.2%, increasing Group load factors by a handsome 5.4 ppts. The Group’s yields last month fell 10.6% year-on-year (and are down by a similar amount for the five months to Nov-2009).

Short-haul yields are recovering off their Jul-2009 floor to be down 7.2% year-on-year last month, reflecting significant changes in the airline’s operations in the segment. Domestic capacity was reduced by 3.0% last month, while Tasman/Pacific capacity was slashed by 17.4% primarily through downsizing to smaller aircraft, reduced frequencies on some sectors and the withdrawal of trans-Tasman flights from Hamilton and Dunedin. This resulted in the load factor increasing by 8.8 ppts to 79.9%.

Air NZ’s international yields are however worsening, falling 15.9% year-on-year in Nov-2009 (albeit off a fairly strong base last year). Capacity on the Asia/Japan/UK routes was reduced by 18.2% in response to a 12.9% decline in demand, resulting in loads increasing by 4.9 ppts to 80.5%.

Viewing Air NZ’s yields against Qantas’ group yields (which include Jetstar) suggests the Australian airline could be seeing some earlier improvements in its international business, albeit mild. Qantas’ domestic yields are also coming back to positive territory more quickly than Air NZ’s short-haul yield (NB: which includes domestic and trans-Tasman operations), although both carriers have a long way to go before they can say the crisis is over. 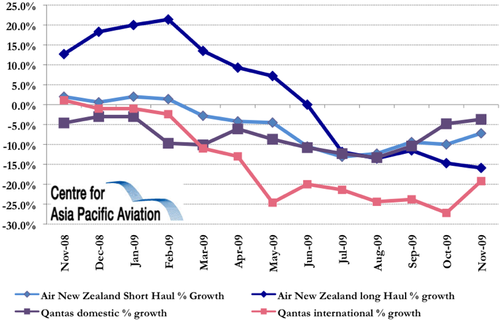