Air New Zealand CEO Rob Fyfe stated the carrier “won’t make money” in the six months to 30-Jun-2011 although services will be full during the Rugby World Cup.

Mr Fyfe, in an interview with Bloomberg TV this month, stated the period from Jan-2011 to Jun-2011 was “the toughest half-year I’ve experienced since I came into this role”, with the carrier being seriously affected by the earthquakes in Christchurch, the earthquake and tsunami in Japan and the floods in Queensland.

Air New Zealand reported a 75% jump in half-year net profit in the six months ended 31-Dec-2010 on improved passenger numbers, one-off gains, improved yields and lower costs. However, the carrier has cautioned over the significant impact of the Mar-2011 earthquake in Christchurch.

Air New Zealand, in Mar-2011, stated its full year pre-tax profit could be NZD50 million-60 million (USD37-44 million) below forecasts. The carrier, which had prior to the earthquake expected to be profitable in the six months to Jun-2011, has forecast that full-year normalised earnings are now expected to fall below NZD100 million (USD74 million).

"Our concerns are relatively near term, for the next three or four months, then we'll see some improvement in our position looking forward from there," CEO Rob Fyfe said at the time. Mr Fyfe has also previously stated that expects to be back in the black for 1HY2012 “based on what we’re seeing today”.

Christchurch is one of New Zealand's three major points and consequently a vital part of the flag carrier's network. Air New Zealand is the largest carrier at Christchurch, ahead of Jetstar Airways and Virgin Australia. The majority of the airport’s capacity is deployed in the Southwest Pacific region. 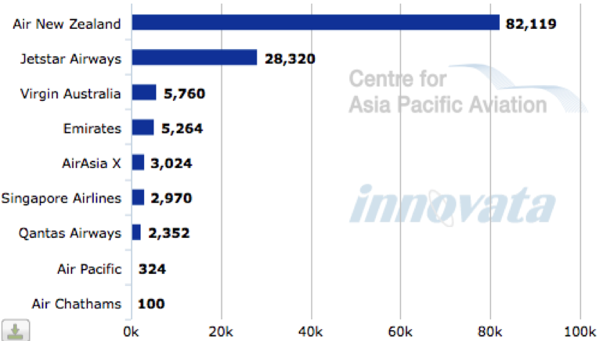 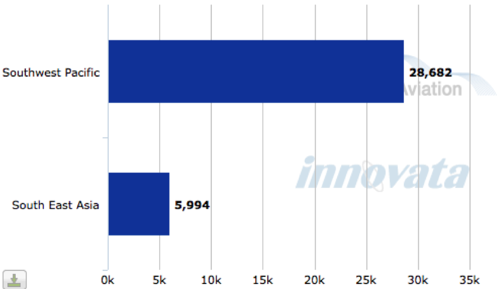 Meanwhile, Reserve Bank of New Zealand this month stated the while the economy was not yet ready for an interest rate rise after the disaster that killed 181 people, the outlook has improvement in recent months and that “business confidence and consumer spending have recovered, suggesting the nationwide near-term negative effects of the earthquake have been contained”.

“Economic activity has been significantly disrupted by the Christchurch earthquake. However, while many firms and households – particularly within Canterbury – continue to be adversely affected, it appears the negative confidence effect of the earthquake on economic activity throughout the rest of the country has been limited. The early signs of recovery noted in the March Statement have continued”, Reserve Bank Governor Alan Bollard said.

The Reserve Bank of New Zealand has estimated that the economy would grow 4.4% in the 12 months to Mar-2012 amid a NZD15 billion (USD12.3 billion) reconstruction programme in Christchurch and the influx of tourists for the Rugby World Cup later this year. Growth is forecast at 3.6% the following year.

Separately, Tourism New Zealand CEO Kevin Bowler said the 5.2% increase in arrivals in Apr-2011 was certainly “pleasing” following sharp declines in visitors during Mar-2011 on the back of the Christchurch earthquake and challenging economic conditions in some of New Zealand's key markets. "The challenge for Tourism New Zealand and the wider industry is to now ensure we have a strong winter season and that visitors are encouraged to come for spring, whether their interest is in rugby or simply having a great holiday at a remarkable time of the year,” he added. 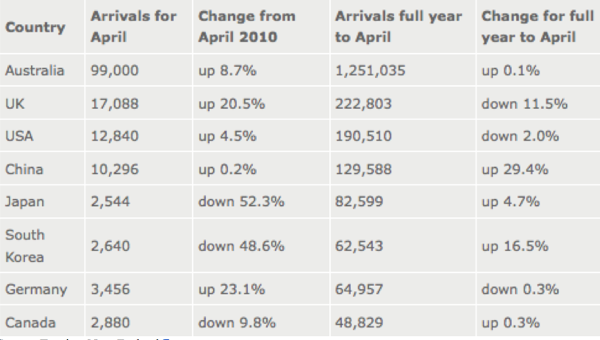 Meanwhile, Air New Zealand handled 1.0 million passengers during Apr-2011, a 5% year-on-year increase and despite a 9% reduction in Asia/Japan/UK passenger numbers. Group-wide domestic yields have declined by 2.8% in the 10 months to Apr-2011 and long-haul yields have been 4.3% stronger, for a group-wide yield improvement of 1.2% in the financial year to date.

Air New Zealand anticipates an earnings and traffic boost of between NZD30 million and NZD40 million (USD25-33 million) from the Rugby World Cup which runs for six weeks from 09-Sep-2011. In Sep-2011 and Oct-2011 during the rugby tournament the airline would have "absolutely full aircraft", adding that the boost from the World Cup is “significant when you’ve come off a tough year”.

The Rugby World Cup will likely draw around 85,000 overseas visitors to New Zealand, according to Tourism New Zealand. The average length of stay for these visitors is around 23 days, with half of them to arrive before the tournament starts and around 20% to remain after the final. Most will come from Australia, 32,000 from Europe, nearly 5000 will come from the Americas and 5000 from Africa. Their average age is mid-to-late 40s and around 70% of the visitors will be male.

Prime Minister John Key has predicted the event will give the economy a 0.3% boost in the second half, helping the nation rebound from the Feb-2011 earthquake in Christchurch. Organisers of the event, meanwhile, are maintaining a 2005 forecast that the event will deliver a predicted NZD500 million (USD413 million) net benefit to a struggling New Zealand economy, although the Finance Ministry has said that New Zealand will suffer a financial loss from staging the Rugby World Cup, without providing an estimate. Australia made a profit from hosting the World Cup in 2003 and France made a profit in 2007, but both nations had more infrastructure in place ahead of hosting the event.

In a separate development, Mr Fyfe, in an interview with The Australian in Jun-2011, stated he believes the carrier’s alliance with Virgin Australia has created a better counterbalance to Qantas dominance in Australasia and will allow the carriers to capitalise on a trend for tourists to visit both Australia and New Zealand.

"By working in a framework with Virgin as sanctioned by the regulators, we've created a far more equal counterbalance to the force of Qantas. So that allows us to effectively compete on a level footing with them. We genuinely believe that will be (more) stimulatory to traffic and customer benefit than having one large competitor marginalising a couple of smaller competitors,” he said.

Air New Zealand acquired a 14.9% stake in Virgin and earlier this year gained regulatory approval to form a marketing alliance on trans-Tasman operations. The carriers in May-2011 announced plans for their new-look joint trans-Tasman network, a key part of their new alliance.

The alliance will connect Air New Zealand’s domestic network of 26 ports to Virgin Australia’s domestic network of 31 domestic ports, offering the largest ever Australasian route network for trans-Tasman travellers. The new network announced will be effective for the upcoming Northern Winter 2011 schedule (Nov-2011 to Mar-2012).  Under the new network, Air New Zealand will operate approximately 70% of the capacity and Virgin Australia’s Pacific Blue airline will operate 30%, similar to the relative market share the airlines had prior to the commencement of the Alliance.

Three of the carrier’s top five international routes are on the trans-Tasman. 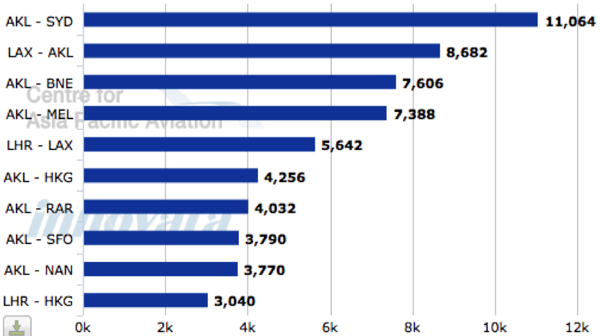 Mr Fyfe said dual-destination travellers - ie those visiting both Australia and New Zealand - were a growing proportion of the airline's core tourism business. He also stated 60% of the tourists visiting New Zealand from China were also visiting Australia.

"So the ability to be able to offer an integrated proposition to the customer that's coming down to have a holiday or vacation in the Australian and New Zealand markets is vitally important to having a competitive proposition for those customers. Because we can't rely on a Star Alliance carrier to help us out in Australia, because there isn't one, the logical thing to do is to create some form of relationship with Virgin that allows us to present a more holistic Australasian solution to the market," he said.

Meanwhile, Air New Zealand stated it would delay plans to licence its "cuddle class" seats to other carriers, stating it will keep the technology “exclusive for longer” due to high passenger demand for the lie-flat units.

Mr Fyfe said demand for the seats, available on some long-haul services has been 20-30% higher than standard economy seats. The carrier began operating B777s with the units to help compete with Emirates and Singapore Airlines on long-haul services. Mr Fyfe stated in Dec-2010 that the carrier was in talks to sell the technology to other carriers.

Separately, Air New Zealand this month stated it would remove a row of seats from its new Premium Economy cabins on its B777-300ERs following passenger complaints about legroom. A row of premium economy “Spaceseats” will be removed in Aug-2011 to provide an additional 6 inches of legroom for passengers. The seats offer 36 inches of legroom in premium economy, compared with the 36-40 inches offered on the older B747-400 equipment. The cabin will be reconfigured from 50 to 44 seats, a 12% fall in premium economy capacity, which is the airline’s equivalent of a business-class offering. A B777-200ER will replace the aircraft on the routes to London, Los Angeles and Hong Kong in late Aug-2011