Air New Zealand CEO Rob Fyfe took the opportunity at Friday’s annual shareholders meeting in Auckland to blast the Australian Competition and Consumer Commission (ACCC) for its draft decision to deny the airline’s trans-Tasman alliance proposal with Virgin Blue. He noted that the alliance with Virgin Blue was a “critical plank” of the airline’s strategy that was designed to “mitigate the structural disadvantages we face as a result of the accelerating pace of global consolidation”.

Mr Fyfe stated the ACCC’s view “effectively puts at risk competition within Australia and across the Tasman”, noting that Air New Zealand's capacity on Tasman routes has reduced by 15% in the past two years and its share of Trans-Tasman travel has been declining for the past five.

“In the face of Qantas and Jetstar's increasing Australasian dominance, this declining competitive position will continue in the void of Virgin Blue and Air New Zealand being allowed to implement this alliance to provide a competitive counter-balance to Qantas and Jetstar in the region,” Mr Fyfe said.

He continued, “the great risk is that if regulators focus on perceived short term competition concerns, long term we will end up conceding the skies to rapidly expanding global hub based carriers, and national carriers like Air New Zealand will become marginalised and forced to progressively reduce their networks”.

“The fact we are a national carrier is highly relevant and is a really important point here.  The mega-carriers are driven purely by business imperatives; they do not have to factor in national interests.  Trans-Tasman traffic accounts for 20% of our business so pulling out is clearly not an option for us.  We’re in it for the long haul; the Tasman is our bread and butter; all we’re asking from the regulators is that they give us a fair go”

The regulatory decision is expected before the end of the year. Rob Fyfe concluded, “the months ahead will be some of the most defining in Air New Zealand’s history and will set the direction of our airline for the decade ahead”.

Chairman, John Palmer, stated the airline is optimistic operating earnings will improve through the 2011 financial year, despite another “tough year”. He stated the carrier is planning to increase capacity in 2011 across the network, particularly on domestic and Trans-Tasman services, through the addition of new aircraft, configuration changes and increased utilisation. 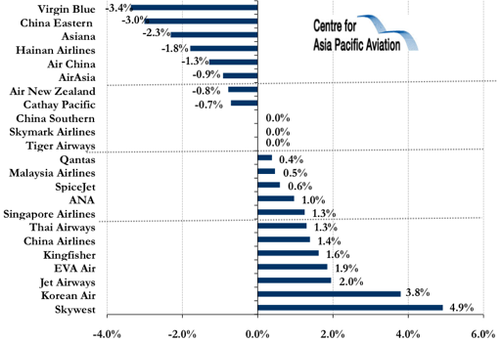