Shares in Air New Zealand slipped 0.8% yesterday, ahead of the expected release of the carrier’s financial results tomorrow (26-Aug-2010). Analysts expect the carrier to report a much-reduced underlying profit in the 12 months to Jun-2010, on reduced revenue levels, although the outlook for 2012 is expected to improve notably.

India’s Civil Aviation Ministry has, according to a Live Mint report today, decided to temporarily stop granting Jet Airways any new codeshare agreements with foreign carriers that are members of Star Alliance until Air India joins the alliance in Mar-2011. Jet Airways has yet to state when it would join an alliance but has been gradually collaborating with members of Star Alliance.

China Airlines, which acquired its stake in 2006 for approximately USD46 million (the same value as the current transaction), reportedly commented that the sale was due to "lacklustre performance" by the carrier. China Airlines had acquired the stake in Yangtze River Express to secure revenue from China's rapidly expanding air cargo market, with spokesman, Hamilton Lieu, commenting: "We wanted to enter the Chinese market via Yangtze River Express before the direct air links between Taiwan and China."

Shares in China Airlines slipped 3.1% yesterday, with Hainan Airlines’ shares one of the few Asia Pacific airline stocks which gained (+1.2%). 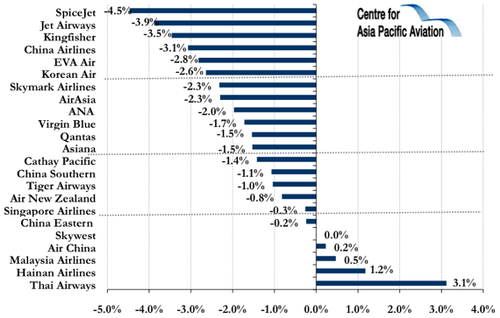