Air New Zealand’s shares fell 0.8% yesterday, ahead of the release of the carrier’s financial results for the six months ended Dec-2009 this morning.

AirAsia back to black in 4Q2009, but unit revenues suffer

AirAsia’s shares slipped 0.7% yesterday, despite the carrier reporting is best ever annual profit and returning to profitability in 4Q2009 (with a net profit of USD23 million and an operating profit of USD94 million), as the economic crisis boosted demand for cheaper air travel.

However, while benefiting from the economic environment, the LCC has not been immune to the effects of the crisis, reporting a 20% reduction in unit passenger revenue in the quarter. Revenue per ASK down by 18%, more than offsetting a 14% reduction in cost per ASK (to an industry leading USD 3.26 cents). Costs per ASK excluding fuel remained stable at USD 1.87 cents. See article: AirAsia profits in 2009, but times are getting tougher

Shares in newly-listed Tiger Airways were also weaker yesterday, down 2.0%, despite reporting a recovery in profit in the three months ended 31-Dec-2009, due to surging passenger numbers (+54% to 1.3 million) and stronger load factors (+4.6 ppts to 87.6%).

The carrier reported an operating profit of USD17 million and a net profit of USD10 million, representing a turnaround from losses of USD3.6 million and USD5.5 million in the previous corresponding period, as revenues soared 30% (to USD99 million, of which ancillaries represented 18%) and operating costs increased by only 3%.

In North Asia, shares in Cathay Pacific gained 0.3% yesterday, while Air China’s shares were down 1.3%, as the carrier’s signed a Framework Agreement to establish a jointly-owned cargo airline. See article: Air China and Cathay Pacific set up Shanghai cargo JV. Chipping away the Hong Kong hub 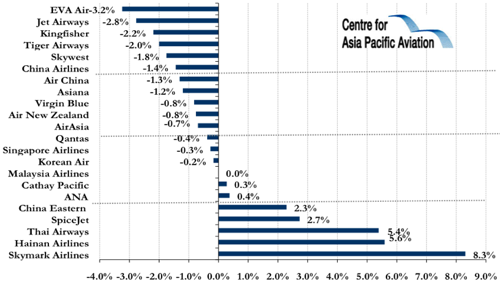