Shares in Air New Zealand gained 3.8% yesterday – but is weaker in early morning trading today – with the NZX 50 rising 1.0% yesterday for the fifth consecutive day of gains on continued expectations of a global economic recovery.

Air New Zealand shares increased at NZD1.35 ahead of a dividend payout of NZD0.04 scheduled for today (08-Sep-2010) with the carrier also announcing it would reduce the cost of lead-in economy fares, and introduce four new in-flight product options for customers on flights between New Zealand, Australia and the Pacific Islands.

Across the Tasman, Virgin Blue Holdings gained 6.2% yesterday (to AUD0.43 cents), to become the best performing stock in the S&P/ASX200.

On the other end of the spectrum, shares in EVA Air and China were weaker yesterday, losing 4.0% and 3.3% respectively, reflecting wider market weakness, with the Taiwan stock market ending its four consecutive days of gains (in which it had increased 2.8%) yesterday, with further weakness expected today. 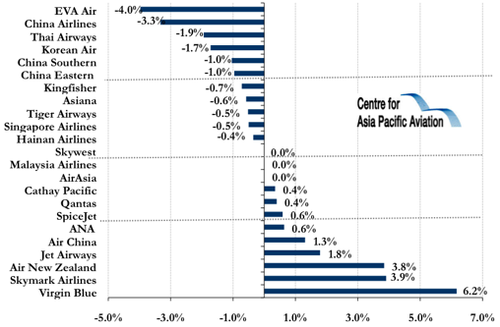