Air Moldova is embarking on a summer expansion programme in Jun-2012, building upon capacity increases already seen in winter 2011/12. From Jun-2012 the airline will expand across Italy, Ireland and Russia, adding new destinations as well as increasing frequencies to existing destinations as it seeks to build connecting traffic through its hub at Chisinau International Airport.

Air Moldova is the flag carrier of the Republic of Moldova and operates to Eastern and Western Europe but most of the upcoming expansion is focussed on western markets. Since 2011 the airline has begun to focus on establishing Chisinau International Airport as an east-west transit hub and has increased year-round capacity on key routes including Bucharest.

The carrier currently serves 16 destinations with a fleet of only five aircraft including three A320s, one Embraer E190 and one EMB-120 turboprop. This limits Air Moldova’s ability to operate high frequency routes and only three of the airline’s network of 16 destinations is now served at least daily. These three routes are all routes where Air Moldova faces competition. Its other services mostly do not see any competition.

Air Moldova has no additional aircraft on order but when it acquired its first E190 in May-2012 the deal included purchase rights for a second E190. To operate its increased summer schedule from Jun-2012, the airline will likely increase the utilisation of its existing aircraft and/or temporarily wet-lease additional aircraft, which it has previously done for the peak summer season.

While most of the capacity the airline is adding next month is seasonal, the carrier has been expanding its year-round offering. Air Moldova’s traffic results for the first four months of 2012 saw an increase of 18% to 130,000 passengers compared to the first four months of 2011. Cargo volumes also showed considerable increases with cargo volume carried from Jan-2012 to Apr-2012 increasing by 52% to 536 tonnes. So while a significant amount of Air Moldova’s summer capacity is seasonal, there is still growth year-round across the carrier’s network. 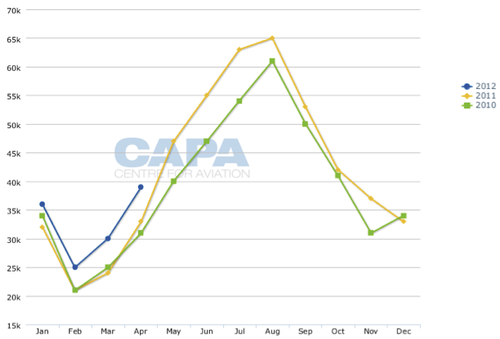 In Apr-2012 the carrier’s largest passenger traffic growth was on services between Chisinau and Paris (109%), London Gatwick (69%), Istanbul Ataturk (53%), Bucharest (52%) and Saint Petersburg (38%). Bucharest has seen recent frequency increases. In early May-2012 Air Moldova announced existing 10 times weekly Chisinau-Bucharest service would see three additional weekly services while it would also codeshare on 12 weekly frequencies operated by TAROM on the route, up from nine.

Summer 2012 will see Air Moldova expand its network with the launch of five new routes. Italy will be seeing the largest increase with three new services, bringing its total Italian network to five destinations.

New Air Moldova routes to be launched in summer 2012

There is no domestic air transportation in Moldova, so Air Moldova’s entire network is international. Only 10 foreign carriers operate to Moldova, according to Innovata data. Air Moldova is by far the biggest carrier in its home market with about 48% of overall system capacity. There is currently minimal low-cost carrier penetration in Moldova, mainly due to the small market, Moldova being outside of the EU, and high airport taxes at Chisinau International Airport.

airBaltic is currently the only LCC operating to the market, however airBaltic is a hybrid carrier rather than a true LCC. Moldova’s low LCC penetration rate may increase once Moldova signs a common airspace agreement with the EU (which was recently postponed from 23-Mar-2012 to a yet-to-be confirmed date). Hungarian LCC Wizz Air stated it would be interested in operating to the small nation once the agreement is signed. The new agreement will further liberalise air links between Moldova and the EU as it would see Moldova accede to the European Common Aviation Area. 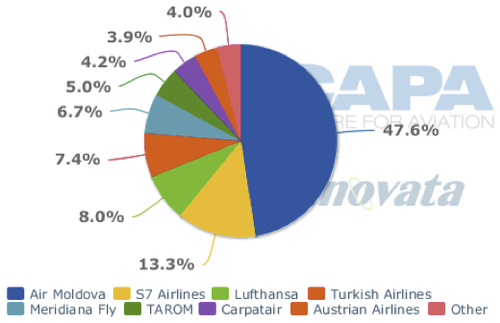 In Jun-2011 Air Moldova stated it was looking to establish Chisinau International Airport as an alternative east-west gateway, stating “launching of transit services will make it possible to promote development of the entire aeronautic industry of Moldova and will further on allow transformation of the Chisinau International Airport into a regional hub. This will make it possible for Moldova to benefit from its geographical location”.

More recently Air Moldova has taken new steps to attract business traffic to transit via Chisinau with the launch of a new business lounge at the airport, available to business class passengers from 07-Apr-2012. For the period Jan-2012 to Apr-2012, Air Moldova carried over 2000 transfer passengers through Chisinau International Airport. This is a small figure but is expected to grow.

To assist with continued growth, Air Moldova has been working to increase its presence further afield with the signing of Billing and Settlement Plans (BSPs) across Europe which allows IATA-accredited travel agencies to sell Air Moldova fares from cities it does not operate from. In 2012 Air Moldova joined BSPs of Israel, Czech Republic, Slovenia, Belgium, Luxembourg and the Netherlands, in addition to the 15 other BSPs it is joined to across Europe and Canada. Mar-2012 also saw Air Moldova sign an interline agreement with Greece’s Aegean Airlines, which became effective on 20-Mar-2012.

Air Moldova’s new strategy focussing upon growing its transit passengers through Chisinau International Airport is a logical strategy to follow considering it can take advantage of its existing Western and Eastern European networks. Historically, the carrier’s main dilemma is the huge seasonal fluctuations it faces between winter and summer. Demand over the winter schedule is much lower than demand over the summer schedule, which raises operational issues. Air Moldova has to deal with either operating a fleet which offers too much capacity in winter or not enough in summer as well as potentially underutilising employees over the winter months.

Focussing more on year-round transit traffic could help ease the seasonal fluctuations. But Air Moldova needs to be mindful of transit hub competition from other carriers in the region such as TAROM and LOT.