Air Mauritius’ shares surged by more than 8% on Friday following the release of its financial highlights for the three months ended 30-Sep-2010 last Thursday.

The carrier reported a 42% surge in net profit to EUR5 million in the period and a 71% jump in pre-tax profits as passenger numbers rebounded 17.8% and passenger yields gained 3%. Cargo volumes rose 20.3% and cargo yield increased 3.9%.

Investors were buoyed by the closure of Air Mauritius’ fuel hedging contract and a statement that the market outlook in the third and fourth quarters is “encouraging and the upward trend is expected to be sustained”, adding the company “remains on course to attain its targets for the financial year”. The carrier, however, noted that continued uncertainty in Europe – its main market – “compels the company to remain cautious”. 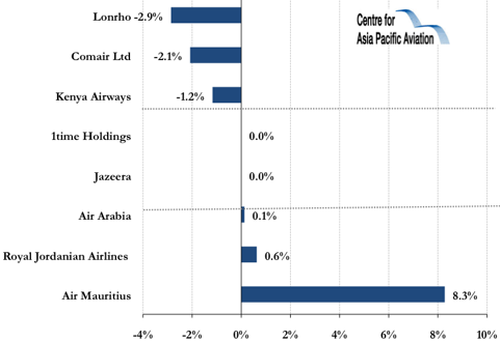