After much prevarication and discussion, the Indian government has at last agreed in principle to a INR50 billion (USD1.1 billion) phased bailout of the national carrier Air India, conditional upon a reduction in costs over the next two years of INR30 billion (USD650 million). Indian Minister for Civil Aviation, Praful Patel, has announced he would appoint seven independent directors to the board of the national carrier in an attempt to improve its efficiency.

In addition to the cost-cutting exercise that Air India must undertake in order to qualify for the funds, there is a further ambitious aim to increase revenue by INR20 billion (USD434 million) during the next two years. Air India made a loss in the year to 31-Mar-2009 of around USD850 million and plans to cut the performance-related pay of more than 7,000 employees, with senior management amongst those affected that could result in effective pay cuts of up to 50%.

The airline was forced to backtrack on the cuts, when senior pilots staged a five-day strike during Sep-2009.

However, pay cuts inevitably must form part of the cost-cutting exercise with the issue now shunted back to a committee that includes Air India chairman Arvind Jadhav and senior Aviation Ministry officials.

In addition, the airline has deferred taking delivery of six Boeing 777 aircraft by two years. It has also floated a tender to lease out seven aircraft and it plans to further lease out around 40 aircraft in 24 months, with the aim of generating additional revenue.

It is still widely believed that a substantial cut in actual staff numbers, not just in pay, from the current level of some 31,000, must be a key ingredient in any turnaround. However, the Group of Ministers (GoM) on Civil Aviation has not yet approved one rupee of the funds to be paid to Air India, with Minister Patel saying after the ministerial meeting that employees and management must first come up with a proper cost-cutting plan if they are to receive the expected government help.

The Indian Ministry of Civil Aviation has reported healthy Indian domestic traffic figures for Sep-2009, with a year-on-year increase for the month of 31.3%

Air India, with growth of 26.6%, was just below the across-the-board increase, with only the Jet Airways group coming in below the national carrier. 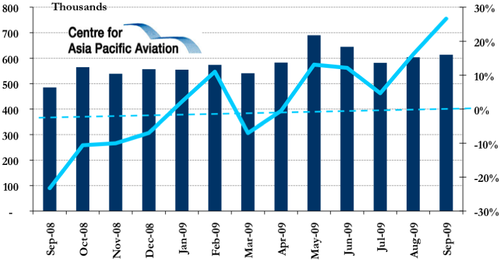 Cash strapped Air India has been given temporary respite, having secured a USD106 million loan from the State Bank of India, to pay employees salaries and flying allowances. An airline source said the amount has only been given to meet immediate expenses, especially employee costs. The airline has been in discussions with various financial institutions to secure additional funds to meet its current liabilities, including payment towards salary and productivity linked incentives to employees.

The airline needs some USD1.06 billion of financial aid and is ambitiously looking to achieve around USD640 in cost reductions.

Meanwhile, the airline’s pilots continue to flex their muscles, despite the dire straights of the company, with the Indian Commercial Pilots' Association (ICPA), saying that if their demands, including payments of pending arrears, were not met by 10-Nov-2009, the pilots will go on strike on 24-Nov-2009, after serving two weeks notice to the airline.

Other than payment issues, the pilots’ demands include requiring management to address setting up a competitive agency to review the airlines' decisions, professionalism, parity in pay scale with other pilots, the taking of firm steps to turn around the airline, and accountability for all the decisions that have been taken.

The pilots have adopted a tough stance and rejected any wage cut proposed by the management, maintaining that they are not responsible for the financial losses of the company. They have also asked the management to phase out expatriate pilots who, they claimed, are being paid "higher" than their counterparts in India. They claim the foreign pilots have also been "kept out" of the national carrier's cost-cutting plans. The airline’s executive pilots held a strike in Sep-2009, leading to widespread cancellations of Air India’s domestic and international flights.

In Jul-2009, in a move aimed at helping the loss-making national carrier generate revenue, the Indian Finance Ministry issued an order asking all ministers and bureaucrats to travel only by Air India when on official duty.

It now seems Civil Aviation Minister Praful Patel’s plan to help the troubled carrier has failed to take off, because many still prefer using private airlines.  Civil Aviation Ministry records reveal that, between 13-July and 31-August-2009, 387 applications were made by ministers, bureaucrats, diplomats and members of the armed forces requesting permission to travel on private airlines - of which all but two were approved.

Justifying the need to use other carriers, a senior official said, “Air India does not have direct flights on a number of sectors. If we were to go by the rules and still travel by the airline, we would need to take detours. Instead of saving, we would end up spending more.”

Air India and Sharjah-based Aerostar are to set up a joint venture for jet engine repair services, for types including the GE CF6-50 and 80 series, P&W 4000 series, GE-90 series and CFM56-7 series, and in the near future, the CFM56-5 series engine.

The new engine MRO facility is to be branded as ‘The A Team’, and is to be targeted at the West Asian market. According to Air India, the initiative will provide engine repair and management solutions to all airline operators in the region, using the existing engine overhaul facilities of Air India in Mumbai and the marketing set up of Aerostar in West Asia.

A marketing agreement was recently executed between the two companies and the brand will be formally launched at the Dubai Air Show. The facility has reportedly received approval from the Indian DGCA, the US FAA, and the European Aviation Safety Agency, and is ISO rated.