European markets were down slightly on Thursday (11-Feb-2010), after the European Council stated it would assist Greece with its debt issues, but declined to outline its plans, with banking stocks declining as a result. Consequently, European airline shares were mainly down at the end of trading.

The carrier aims to break even FY2010-11, as a result of "measures to reduce costs, the anticipated slight progression in unit revenues, the launch of the new medium-haul product and the restructuring of the cargo business already under way". See related report: Singapore Airlines leads the way in slashing labour costs. SAS still worst in class. Air France-KLM has more work to do

Stocks of other large European carriers, including Lufthansa (-3.8%) and Iberia (-3.2%) dropped as a result, on investor concerns the demand environment remains soft.

Norwegian Airlines (+13.9%) was the day's biggest gainer, after the carrier reported an 8.4% increase in 4Q2009 revenue and a return to profitability on the EBITDAR, EBITDA, EBIT, EBT and net levels. See related report: LCCs account for 22% of global capacity in Feb-2010; Norwegian Air Shuttle returns to profitability

Thomas Cook Group (+0.6%) was also up slightly, as the group announced a narrower loss for the three months ended 31-Dec-2009. The company reported a loss before tax of GBP81.5 million, compared to a loss of GBP112 million in the previous corresponding period.

Thomas Cook stated it expects the Winter season trading to trend towards reduced capacity levels. However, with full year results underpinned by a strong Summer programme, weighted towards higher margin destinations, and cost reduction plans, it is confident the Group will perform in line with Board expectations. 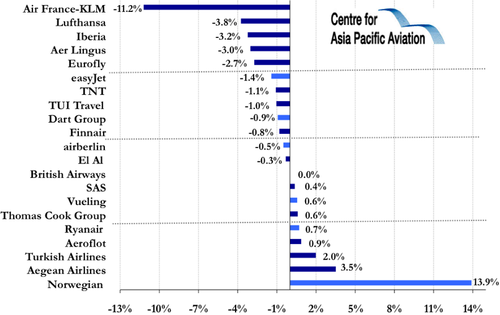