Air France-KLM slowly crawling out of a very deep hole

Air France-KLM reported “some signs of recovery in activity” during the Dec-2009 quarter (its fiscal third quarter), but it expects to report a fourth quarter loss on par with last year’s result as the economic environment “remains difficult”. The airline stated the trend in unit passenger revenues was “more favourable" than in the previous two quarters, but they remained well below last year's level.

Air France-KLM stated, “although the decline in unit revenues recorded a marked slow-down for the first time since the beginning of the current financial year, particularly in premium long-haul, they nevertheless remained well below the levels of 3Q2008-09”.

The third quarter, which is traditionally the most active for the cargo business, also benefited from the effect of industrial re-stocking around the world, prompting healthier volumes and a “marked improvement” in unit revenues, although they remained well down year-on-year. 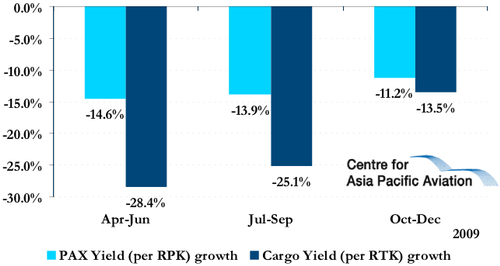 Combined with a reduction in passenger capacity of some 5%, the yield weakness led to a 15% decline in passenger revenues, while the decline in cargo revenues halved in the third quarter relative to the previous two quarters, as activity levels improved somewhat. 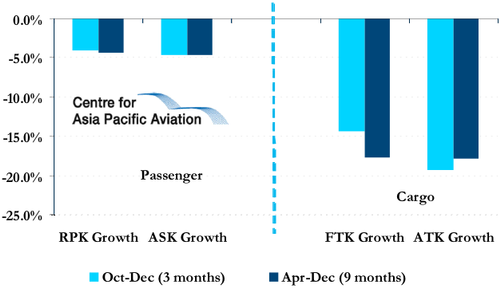 Overall, the Air France-KLM Group recorded a third quarter operating loss of a similar level to last year’s EUR245 million, despite a 16% drop in revenues to EUR5.2 billion. In contrast to previous quarters, the negative impact of the pre-2009 fuel hedges was small, at EUR34 million. The net loss, group share, amounted to EUR295 million, a significant improvement on the loss of EUR508 million recorded a year earlier.

Air France-KLM stated it expects an operating loss for the fourth quarter “of the same order as last year’s, taking into account a later than expected pick up in unit revenues, lower capacities (in the region of -2% for passenger and -7% for cargo) and an increase of some 300 million dollars in the fuel bill”.

The airline reiterated its target of returning to an operating break-even position in FY2010-11 (excluding the impact of pre-2009 hedges), reflecting “measures to reduce costs, the anticipated slight progression in unit revenues, the launch of the new medium-haul product and the restructuring of the cargo business”.