Air France-KLM shares down after quarterly loss and profit warning

Air France-KLM shares finished the day 7.7% lower, following a profit warning from the European carrier. The carrier stated its results for FY2011 may not meet its earlier targets,. Despite revenue improving 13.9% year on year for the three months to 31-Dec-2010.

Snowstorms and strikes by French and Spanish air traffic controllers were among a number of one-offs that have affected the carrier’s bottom line. The political instability in North Africa and the rising price of oil over the quarter have also affected the carrier’s results, with Air France-KLM reporting a net loss of EUR46 million for the period.

Elsewhere in Europe, Spanish LCC Vueling reported its passenger traffic highlights for Jan-2011, with passenger numbers falling 4.9% year-on-year to 643,000. The carrier’s average load factor improved by 2.3 ppts, as it slashed flights by 8.9%, despite adding a new A320 to its fleet. Shares in Vueling ended the day 3.4% lower.

The Association of European Airlines reported that traffic on North Atlantic for the fifth week of 2011 rose 2.5% year-on-year, at an average load factor of 63.5%. 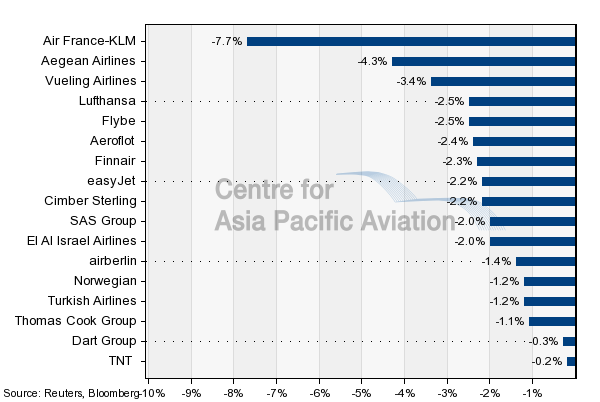