Air France-KLM (+2.6%) was the biggest gain in a day of mixed trading for European airlines on Wednesday (17-Nov-2010). The carrier gained after stating FY2010 earnings would be better than originally expected, due to recent strong sales and forward bookings.

Air France-KLM expects an operating result for the year to 31-Mar-2011 of better than EUR300 million, compared with an operating loss of EUR1.3 billion in the previous fiscal year. Cargo operations are also expected to be profitable for the full-year. Air France-KLM Group plans to four or five new Asian destinations by 2014 and a similar number in Africa and the Middle East, plus one or two in the Americas.

During trading, the group reported a net profit of EUR290 million for the three months ended 30-Sep-2010, compared with a loss of EUR147 million in the previous corresponding period. The improvement was on the back of an 18.6% year-on-year rise in revenue, to EUR6,649 million.

The results beat analyst expectations. According to Bloomberg, analysts had on average expected the carrier to report a profit of EUR248 million, on EUR6.5 billion in revenue.

Aegean Airlines (-2.4%) suffered the biggest decline of the day after EU Competition Commissioner Joaquin Almunia stated Aegean and Olympic Air still face “some difficulties” in efforts to overcome antitrust concerns over their planned merger. The EC launched an in-depth antitrust review of the plan in Jul-2010 amid concerns that combining the two Athens-based airlines would hurt competition. The regulator is scheduled to rule on the merger by 12-Jan-2011. 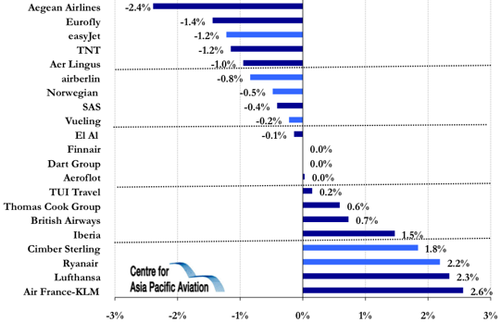