Air France-KLM chairman and CEO Jean-Cyril Spinetta was unassuming in his comments regarding the company's 3Q2012 results when describing the performance of the group as “satisfactory” across all its businesses with the exception of cargo. Behind closed doors, management of the embattled group was probably more cheery – for the first time in the past two years Air France-KLM could shelve bad news and instead announce a clear improvement of its financial results with net income for the three months ending 30-Sep-2012 jumping to EUR306 million and operating profit up 28% to EUR506 million.

Net earnings rose to EUR306 million from EUR14 million in the year-ago-period and was above the average consensus by analysts of EUR267 million. Also Air France-KLM’s income from operations was above the average forecast of EUR427 million, giving the company’s share price a welcome upward tick of 8.4% on 31-Oct-2012, the day its 3Q2012 results were published, to close at EUR6.44.

The better operating result was realised mainly on the back of its passenger business, where the limited capacity increase led to improvements in unit revenues. Unit costs rose at a slower pace, and even declined by 1.2% at a constant currency and fuel price as a result of the Group’s restructuring efforts under its Transform 2015 plan.

Also Air France-KLM’s maintenance activities delivered a noteworthy increase in operating profit despite a 5.9% decrease in sales, although the year-over-year comparison is slightly distorted as the 3Q2011 EBIT included EUR23 million in one-off costs linked to strike action at its line maintenance division. Excluding the exceptional charges, the firm’s MRO business still recorded an attractive year-on-year 27% improvement in EBIT.

Conversely, the Group’s cargo business more than doubled its loss on operating activities in 3Q2012 compared to the year-ago period. The Group’s “other" businesses, which comprise its low-cost/leisure carriers Transavia.com and Transavia.com France as well as the catering unit, increased operating profit by 15% to EUR68 million. 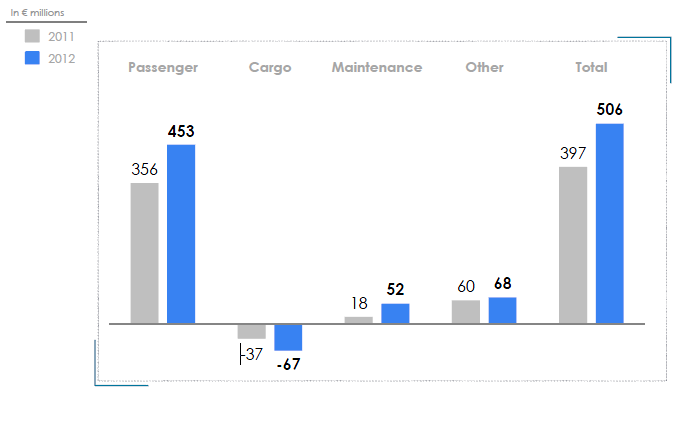 Net debt on the way down

An intrinsic component of Air France-KLM’s turnaround programme is paring net debt by EUR2 billion by the end of 2014 through the reduction of planned capacity growth, a cutback in capital expenditures and several cost-saving measures. During the 3Q2012 results presentation, Mr Spinetta assured analysts that the Group would not deviate from this target and that net debt at the end of the current financial year on 31-Dec-2012 would be lower relative to 31-Dec-2011. 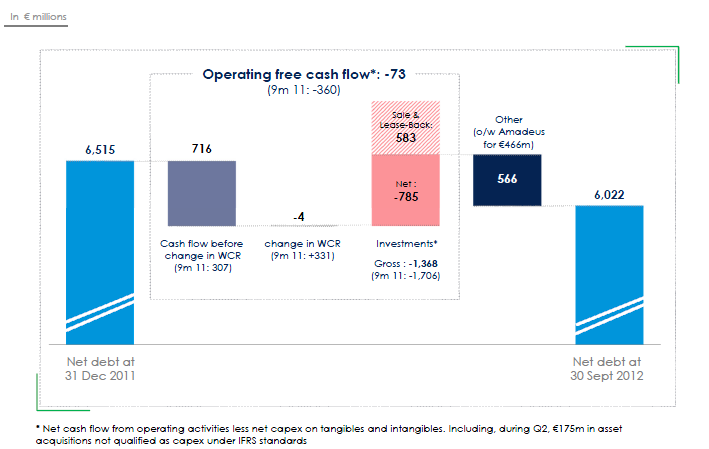 Transform 2015 aims to bring Air France-KLM onto a solid financial footing and shake off legacy costs to make it more dynamic in a rapidly changing environment, both in Europe and on a worldwide level. The Group has acknowledged the Middle East’s Gulf carriers are there to stay and on 08-Oct-2012 signed a ground-breaking codesharing agreement with Etihad Airways and airberlin while announcing one week later a total shake-up of Air France’s organisational and management structure based around eight business units.

Revenues up, costs down: there is hope for a turnaround

The company’s total consolidated revenues grew 5.8% year-over-year during 3Q2012 to EUR7.1 billion, driven by a 7.9% rise in passenger revenues to EUR5.4 billion.

Revenues of Air France-KLM’s cargo business fell 1.9% in the quarter versus the year-ago period as a result of the economic slowdown combined with the persisting overcapacity in the industry, especially in major Asian markets. Cargo traffic fell by 6.6% on a 3.7% reduction of capacity to 3.3 billion ATKs, and consequently the cargo load factor dropped 2ppts to 61.8%.

The company reduced full freighter capacity in 3Q2012 by 9%, including a 31% reduction on routes to Asia. During the presentation of the 3Q2012 results to analysts, management indicated it will step up the rate of cargo capacity adjustments in the coming months. 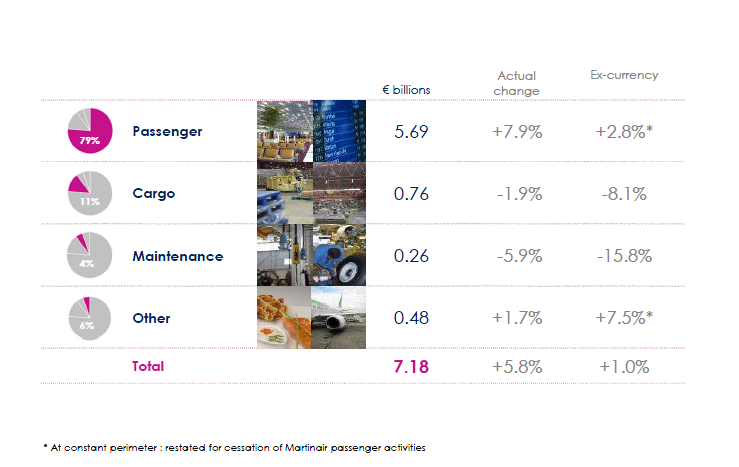 Air France-KLM’s consolidated operating expenses during 3Q2012 increased 4.5% to EUR6.6 billion, growing at a slower pace than its total revenue. Total operating costs, excluding fuel, declined by 0.7% and on a comparable currency basis they fell 1.1%, reflecting the impact of the cost control measures implemented in the context of Transform 2015.

The Group’s main changes in operating costs in 3Q2012 related to fuel expense, which rose by almost 15%. Air France-KLM's fuel costs increased by EUR254 million under the combined effects of a 2% decline in volume, a negative euro/dollar exchange rate of 15% and a rise in the price after hedging of 2%. Air France-KLM employee costs (excluding temporary) rose 1.2% to EUR1.9 billion in 2Q2012 in spite of a 2.7% year-on-year reduction in head count. The company's employee expenses in the quarter were negatively affected by a EUR18 million pension charge at KLM.

Unit cost per EASK (equivalent available seat kilometre), the Group’s preferred measure as it includes both passenger and cargo capacity, rose 4.2%, but declined 1.7% to EUR6.69 cents on a constant currency and fuel price basis on a 0.6% production increase of EASKs as the company’s restructuring plan starts to deliver results. Air France-KLM’s three-year Transform 2015 is targeting a 10% reduction in unit costs (excluding fuel) from 2011 levels to achieve a unit cost of EUR4.4 cents per EASK in 2014. 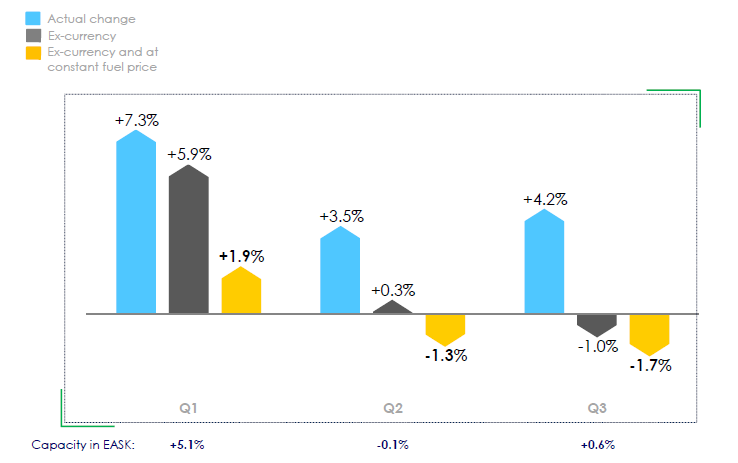 Mr Spinetta said Air France-KLM’s passenger business enjoyed a “good summer season” as passenger revenue grew by a buoyant 7.9% in  3Q2012, which is typically the airline’s strongest quarter. Passenger revenue growth was driven by a strong increase in unit revenues as the company applied a timid capacity growth in 3Q2012 of 1% year-over-year to 72.2 billion ASKs. RPKs rose at a similar low pace (0.9%) to 62 billion, keeping seat factor at 86% across its network.

Unit revenue per ASK rose 6.3% to EUR7.54 cents while unit revenue per RPK increased 6.4% to EUR8.77. However, most of the unit revenue growth in 3Q2012 was underpinned by a positive foreign exchange effect due to the depreciation of the euro versus other currencies. Excluding the currency effect, Air France-KLM's RASK increased 1.9ppts and yield inched up 1.8%. 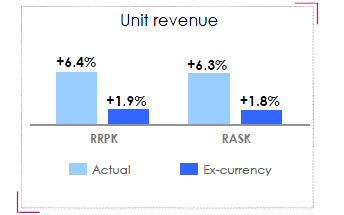 Three regions within Air France-KLM's long-haul network drove the unit revenue growth – the North Atlantic, Middle East/Africa and Caribbean & Indian Ocean. Latin America recorded a 2.2% drop in RASK and Asia saw virtually no increase in unit revenue in 3Q2012 versus a year earlier, as Europe’s sluggish economies are having an effect on trade.

The 8.1% unit revenue growth recorded in 3Q2012 on North Atlantic routes was the result of the strict capacity discipline of all three alliances (oneworld, SkyTeam and Star) operating on these routes. Air France-KLM reduced ASKs on its North Atlantic network by roughly 3% year-over-year in 3Q2012 following on 10% reduction in 1H2012. 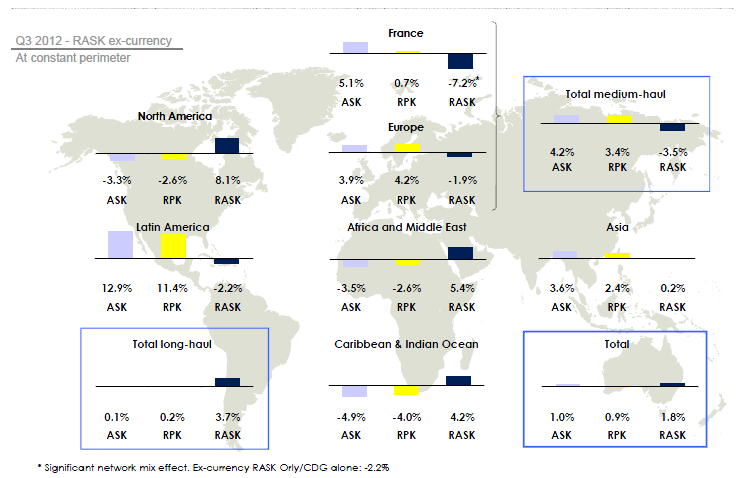 Europe is still problematic and will need more drastic measures

France retained its lead position as the company's worst performing regional entity during 3Q2012, with RASK excluding currency effects in the country falling by about 7.2%.

Air France increased capacity in its home market by 5.1% and 3.9% on European routes as part of its initiatives to regain ground on foreign LCCs, specifically easyJet but increasingly also the LCC start-up Volotea, through the launch of three new regional Air France bases at Marseille, Nice and Toulouse airports.

Air France is also planning expansion of its in-house Orly-based low-cost/leisure carrier Transavia.com France to fence off the likes of easyJet and Ryanair and it is in the midst of restructuring its three French regional carriers Brit Air, Regional and Airlinair.

easyJet now accounts for an approximate 11% share of domestic seat capacity in France and Volotea 2%, according to schedules in Innovata for the week of 29-Oct-2012 to 04-Nov-2012. Ryanair holds a near 3% of domestic seat capacity. Europe’s two leading LCCs jointly have an approximate 17% capacity share of seats deployed on international routes to/from France, with easyJet producing some 214,000 seats and Ryanair about 184,000.

During a call with analysts to discuss the group’s 3Q2012 results, Air France-KLM CFO Phillipe Calavia acknowledged Air France’s new regional division faces renewed competition in the French domestic market, referring to Volotea. “It is more of a challenge than an opportunity for us…It is one of the challenges we face when we are building up our new regional organisation,” Mr Calavia said.

Volotea on 29-Oct-2012 announced that it will launch a second base in France, at Bordeaux Airport, with two Boeing 717s operating on 13 routes to Ajaccio, Bastia, Grenoble, Lille, Strasbourg and Toulon in France; Venice, Florence, Palermo and Olbia in Italy; Malaga and Ibiza in Spain; and Munich in Germany. The Spanish LCC will open its Bordeaux base on 28-Mar-2013, joining its base at Nantes Atlantique Airport.

CityJet has posted losses in the past three fiscal years. It reported a EUR25.8 million operating loss in its fiscal year ended 31-Mar-2011, compared to a loss of EUR45.7 million in FY2010, on a 21% increase in revenue to EUR316 million and a 10.5% hike in passenger numbers to 2.3 million. According to Mr Calavia, CityJet recorded a “slightly negative” operating result in 3Q2012.

In Jun-2012, CityJet CEO Christine Ourmières told CAPA the company had made significant progress to restructure the business following the acquisition of Belgian regional carrier VLM, and the economic crisis. She said she was hoping CityJet will be not be touched by Air France’s planned restructuring of its money-bleeding French operations. “We‘re in a different box because we are not a French company; out of sight, out of mind. In addition, we started our restructuring already last year and we’re in the final stages,” said Ms Ourmières. However, she acknowledged a divestment of the company could not be excluded.

Air France-KLM’s results show that management is serious about turning the business around. The company’s 3Q2012 earnings contain indications that recovery is on its way but results of one quarter, seasonally its strongest quarter, are not sufficient to cry victory. For the first nine months of 2012, the Group’s balance sheet has a net loss of EUR957 million and an operating loss of EUR157 million.

A real transformation of the Franco-Dutch Group will require a rigorous continuation of the strict cost cutting exercise, seeking new revenue streams and above all a changed mindset that legacy is a luxury of the old world order. Management seems to have made the mental change, and it is its duty to convince employees – and its governments – that austerity measures are needed to ensure survival and sustainability.