However, Mr Gourgeon stated he could not predict when the company will achieve profitability, adding that fuel hedging would continue to have a negative impact on the carrier in FY2010, although previously announced cost-cutting measures are expected to prevent cash flow deterioration over the European Spring.

Mr Gourgeon also stated that the carrier plans to resume limited fuel hedging in Oct-2009. The carrier will also hedge only 18 months ahead instead of four years in advance.

Air France-KLM would retain current capacity levels in 2010 and 2011, with traffic not expected to return to 2008 levels before 2012. The carrier plans to launch daily A380 Paris-Dubai service from Jan-2010 one month before Emirates deploys its A380 equipment on the same route. Air France also plans to launch A380 services to New York and Johannesburg, although exact dates have not been disclosed. The carrier has an order for 12 A380s, which are scheduled to commence delivery in late 2009.

Air France-KLM meanwhile stated it plans to offer additional services traditionally provided for premium passengers on an “a la carte” basis to Economy travelers, to boost ancillary revenues amid a decline in ticket revenues. Services that could be purchased item-by-item include larger luggage allowances and tickets with flexible change policies.

Shares in Lufthansa lost 0.3% yesterday, as the Frankfurt DAX closed 0.13% lower. CFO, Stephan Gemkow, stated the carrier is sufficiently financed, adding, “we do not need to approach the capital markets in the short term for reasons of liquidity” - unlike the US carriers. 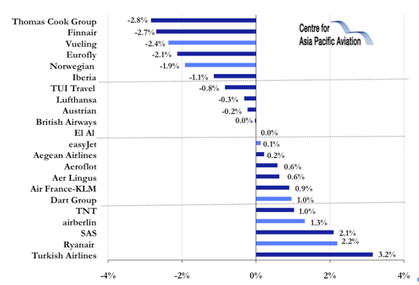