European airline shares fell with the wider markets on Friday (04-Jun-2010), which were pushed lower by the banking sector on concerns about Societe Generale's derivatives division and continued worries over debt issues in the region. Hungary’s central bank stated the country is still vulnerable to shocks due to its high debt.

Air France-KLM (-4.6%) CEO, Pierre-Henri Gourgeon, reportedly informed the French National Assembly that the group may report an operating loss of EUR300-400 million in for the 12 months to Mar-2011, due to losses related to fuel hedges. Excluding the hedging losses, the carrier hopes to report an operating break-even result. The hedging losses come from pre-2009 purchases and are based on an oil price of USD85 per barrel.

Lufthansa (-2.4%) CEO, Wolfgang Mayrhuber, stated after trading on Friday he sees no risk that Standard & Poor’s will reduce its investment-grade rating, despite the carrier's losses from the volcanic ash cloud and a pilot strike. Mr Mayrhuber commented that an upswing in cargo traffic and growing demand on intercontinental and business services is expected to improve the company’s financial situation and support the BBB- rating. He added that Lufthansa plans to focus on raising yield rather than increasing its market share by offering more capacity to respond to the recovery in passenger numbers.

SAS Group (-2.5%) and the Estonian Government reached an in-principle agreement that will result in SAS divesting its 49% stake in Estonian Air, which it has had since 2003. The Government will provide approximately SEK205 million (EUR21.3 million) of new capital in a new rights issue and SAS will convert approximately SEK20 million (EUR2.1 million) in loans into equity. Following the rights issue, the Government will hold 90% and SAS 10% of Estonian Air.

SAS will also remain lender of approximately SEK70 million (EUR7.3 million) in loans with a maturity in 2014. The transaction is neutral to profit and liquidity of the SAS Group. Meanwhile, Estonian Air has an option to buy SAS' remaining stake and SAS has the option to sell its stake at fair market value after four years. SAS will continue its commercial cooperation with Estonian Air. 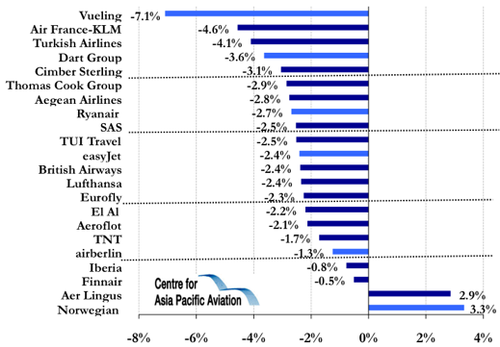