Air France–KLM CEO, Pierre-Henri Gourgeon, has labelled the state of oil prices as “abnormal”, “uncontrollable” and “unmanageable” and is pushing for regulators to create “coalitions to limit this indecent spiral”.

Mr Gourgeon's recent commentary stems from the continued volatility of the price of oil. He argues that the spikes and drops, which change prices by as much as 10% through the course of a week, are as result of market bubbles and create conditions that are “killing the real economy”.

Typically, fuel accounts for a third of full-service airline costs (more as a proportion in developing markets, where labour is relatively less costly). For LCCs fuel can account for as much as 50% of operating costs.

Carriers have attempted to offset the swings in oil prices by hedging, but the volatile nature of oil markets over the past few years has caught many betting the wrong way, resulting in heavy losses.

Air France-KLM attributed much of its recent third quarter loss to fuel hedging, and other carriers are expressing similar displeasure at the unsteady nature of oil prices. Philippine Airlines noted that despite lower fuel prices in 2009 compared to 2008, it is still vulnerable to “volatile price swings” of oil in the world market.

Many carriers burnt by poor fuel hedging decisions in 2008 are revising their strategies. United Airlines, which lost more than USD370 million in 4Q2008 alone on fuel hedges, has a 40% hedge position for 2010 (75% for 1Q2010), and has cautiously only hedged 5% of its 2011 fuel requirements. It expects prices to climb during 2010, but remain volatile.

US Airways CFO, Derek Kerr, told Reuters that the carrier has abandoned fuel hedging entirely. The carrier has not hedged any of its fuel requirements since Aug-2008 and has no plans to return to hedging, as it is “not a prudent use of our shareholders' money right now... The volatility has been so great over the last year.”

Singapore Airlines, which suffered USD225 million in fuel-related hedging losses during 4Q2008, has cut its fuel hedges as well, from 30-60% of forward positions to 20-60%. SIA has reportedly hedged 36% of its fuel requirements at prices of between USD104 and USD109 per barrel.

AirAsia announced yesterday that it has hedged approximately 24% of its fuel requirements (having dumped its fuel hedging positions in late 2008 at considerable expense) for 2010, noting it would “continue to monitor the market for more hedges in 2010 and beyond”. See related report: AirAsia profits in 2009, but times are getting tougher

Oil jumps back after slow week

Oil prices topped USD80 per barrel briefly this week, before dropping back on further weak data related to the US economy and consumer confidence. For the week to 23-Feb-2010, oil prices were up 2.1%, to USD78.61 per barrel. 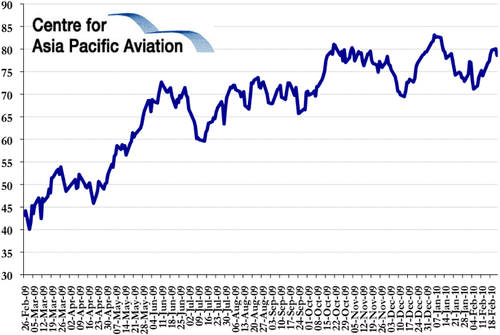 Jet fuel prices (cents per gallon) rose firmly above USD200 cents on all markets. US Gulf Coast and Singapore prices, which had previously been below USD200 cents, rose the most (3.2% and 3% respectively), while Amsterdam prices were the most subdued, up just 0.9%. 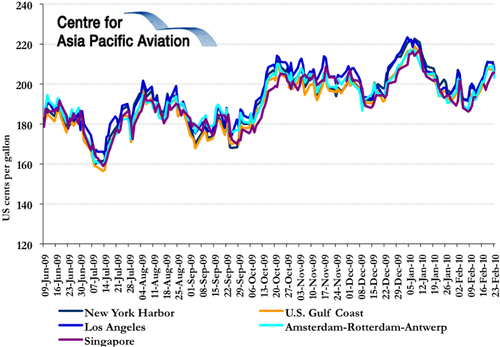