Air France-KLM plans to appeal the damages payment awarded by a French court against Continental Airlines over the Concorde crash a decade ago, according to a report in Le Figaro.

British Airways fell 2% as the cabin-crew union stated it would commence polling members next week on taking further strike action in their dispute. Meanwhile, merger partner Iberia fell 2.2% as it signed an agreement with it cabin-crew union that will be valid until 2012.

Meanwhile, Virgin Atlantic has confirmed it has received a "number of lines of enquiry" about possible partnerships or mergers with rival airlines, according to a Sky News report. Delta Air Lines is among the interested carriers and the US carrier may have appointed an adviser according to the report.

Virgin Atlantic is 49% owned by Singapore Airlines and 51% by Virgin Group. 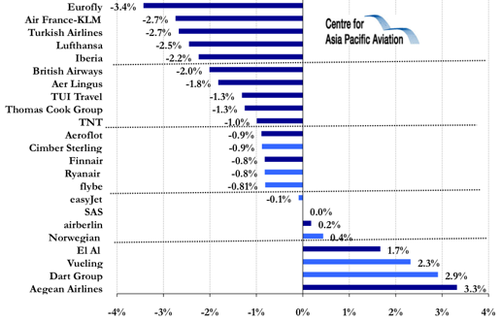