European carriers’ shares were mixed on Wednesday (03-Feb-2010), as equities markets ended trading down, on investor concern of the economic health of smaller countries on the periphery of the EU. Portugal’s sovereign debt reached its highest point ever, adding to concerns about Greece. A drop in banking and mining stocks also pushed markets lower.

Following speculation by the market that the merger between British Airways and Iberia was looking more likely, the two carriers confirmed during trading they are on track to sign a merger agreement in 1Q2010, but there is still no fixed date. The two carriers still need to reach an agreement on how they will address British Airways’ pension deficit before signing a merger agreement.

Air France (-0.2%) slipped despite announcing during trading that its Flying Blue frequent flyer programme is currently attracting 123,000 new members each month, compared with 115,000 a year ago. The joint Air France and KLM programme offers its 17 million members the opportunity to earn and use miles with 108 airline and non-airline partners.

Also during trading, IATA released its Airlines Financial Monitor for Dec-2009 to Jan-2010. According to the report, European carriers reported an average load factor of 76.4% during 2009, as traffic (RPKs) fell 5.0% and capacity (ASMs) was reduced by 4.4%.

During 4Q2010, the carriers reported an average load factor of 76.0%, as the fall in traffic (-1.4%) and reduction in capacity (-3.5%) decreased with the improving economic environment in the region.

According to IATA, the upturn in load factors worldwide, reaching record highs by the end of 2009, has tightened supply-demand conditions on international airline passenger markets. As a result, average fares are now starting to increase, though their upturn has lagged the rise in passenger numbers. By Oct-2009, premium fares, which had been more than 25% down at the start of 2Q2009, had recovered to a level 10% lower. Economy fares were 5% lower than a year earlier. 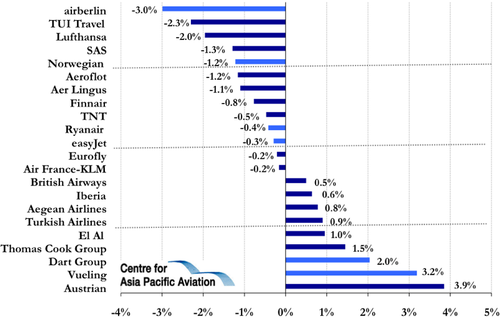