European airline shares were mixed on Thursday (02-Sep-2010), mirroring a day of mixed trading. On the whole, European markets ended the session slightly lower, despite the European Central Bank’s announcement of plans to keep interest rates down.

The French market gained after France's Finance Minister, Christine Lagarde, commented that the "job market is stabilising" and added that the Finance Ministry is predicting a total of 71,000 jobs will be lost in 2010, mostly in 1H2010, after 373,000 jobs were shed in 2009. Separately, France's National Institute of Statistics and Economic Studies (Insee) stated France's unemployment rate unexpectedly fell for the first time in two years in 2Q2010, declining to 9.7% from 9.9% in 1Q2010.

Air France-KLM (+1.6%) gained marginally after news the airlines is reportedly considering establishing a domestic LCC due to intensified competition from LCCs in the French market. The new airline, reportedly to be named Air France Express, could be established in 2011 with bases in the southern cities of Marseille, Nice and Toulouse if an agreement can be reached with unions. The carrier already operates a low-cost unit in Transavia.

Aeroflot (-0.7%) meanwhile slipped, after the carrier reportedly stated this week that a Russian Commercial Court in Krasnoyarsk has upheld a Federal Antimonopoly Service (FAS) decision to fine the carrier for anti-competitive practices.

Ryanair (-1.5%) stated it may close some of its routes in Germany due to a new departure tax to be introduced by the German Government, with spokesman, Stephen McNamara, stating: "We will have to review all of our routes, and it is likely that these taxes will lead to a decline in passenger numbers." 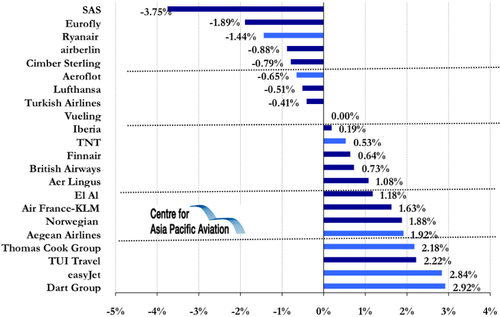