Air France reports the deterioration in its unit revenues in Jul-2009 was “slightly less pronounced than in previous months”. That is, the airline is still discounting aggressively to keep its aircraft full, which is of concern as the Summer peak travel season reaches its climax.

Air France-KLM reported 0.7 ppts rise in load factor to 85.1% last month, “thanks to a limited decline in traffic”, which fell 3.3% after a drop of 5.8% in the first quarter ended 30-Jun-2009. Passenger capacity was reduced by 4.1%. In the cargo segment, Air France noted that the decline in traffic (-17.2%) was “in line with that of capacity” (-17.0%) leading to a stable load factor of 64%, adding the data “confirms the trend towards a stabilisation in the cargo activity, with a progressive adjustment of capacity to demand”. Air France did not comment on cargo yields last month.

In the first quarter, Air France-KLM’s passenger revenues slumped 18.7% and cargo collapsed by 41.5%, leading to a drop of 20.5% in total group revenues to EUR5.17 billion. The carrier’s unit revenues per available seat kilometre (RASK) fell 14.8% in the first quarter, while cargo yields tumbled 25%.

Lufthansa Group’s revenue slumped by 15.2% in the six months ended 30-Jun-2009, including a 19.3% plunge in air traffic revenue to EUR7.8 billion, which was “mainly due to the decline in passenger and freight figures, as well as lower average yields per passenger. Group passenger yields fell 11.8% in the first half.

Falling average prices ripped over EUR1.2 billion in revenue from the Group in the first half alone. 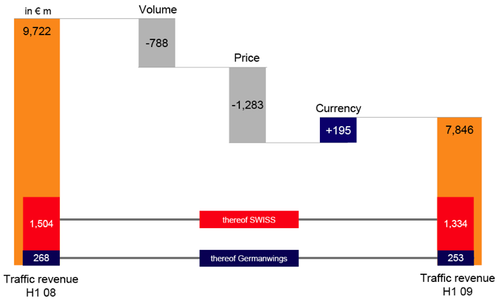 NB: Some previous year’s figures have been adjusted to account for the valuation changes under IFRIC 13
Source: Lufthansa

Lufthansa Passenger Airlines and SWISS development of traffic by region: 1H2009 vs 1H2008 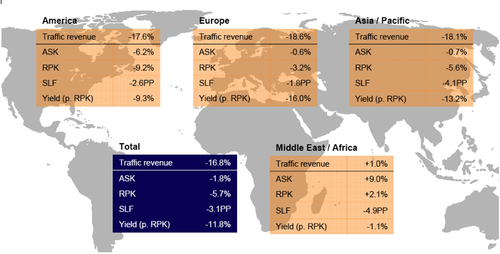 Lufthansa is due to report its Jul-2009 traffic figures shortly.

German rival, Air Berlin, meanwhile reported a 5.9% increase in RASM last month, continuing its recent positive performance. However, yield growth at the carrier has slowed to the single-digits this year, following exceptional growth up until and including Jan-2009. 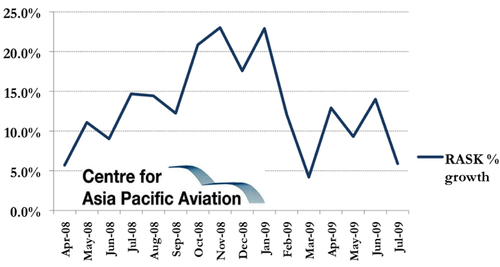 The carrier noted it has “continued to adapt” to the economic environment, adding, “the group is also undertaking a review of the medium-haul network, both in terms of destinations and products, and the outcome of this process will be implemented at the beginning of 2010. At the same time, we continue to adapt our employee headcount to current levels of activity”.

Lufthansa Chairman and CEO, Wolfgang Mayrhuber, recently observed, “crises ruthlessly reveal the weak points and we shall act. It is only sustainable structures that will allow our company to match its past successes and succeed against the competition in the long-term.”