Air China's shares closed steady on Friday after it agreed to purchase 20 new B737-800s to meet rising demand. Air China stated the aircraft would be delivered between 2013 and 2015 and would “strengthen the fleet capacity of the company with an increase of approximately 5%”. The carrier added the transaction would “reinforce the company's market share in the domestic market, and will also increase frequency of flights for a number of domestic and neighbouring international routes."

Kingfisher gained 2.1% as the airline stated future oneworld partner, Finnair is looking to partner with the Indian carrier for sales to more Indian destinations, such as Mumbai. Finnair suspended Helsinki-Mumbai service in Apr-2008, but operates daily to Delhi. 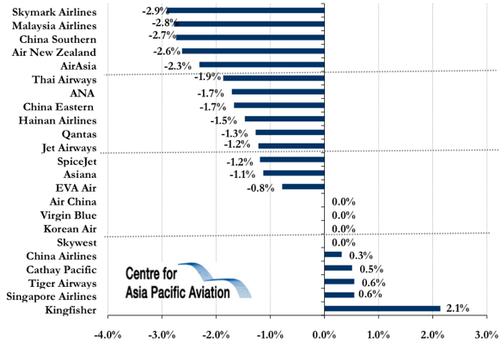