Air China interested in mergers; Boeing and Airbus see the importance of the Indian aviation market

Air China Chairman, Kong Dong, stated the carrier is interested in mergers and acquisitions in both the domestic and international market, with the carrier confirming its intention to acquire Shenzhen Airlines - China's fifth largest carrier - as part of efforts to build its strategic network and presence in the Pearl River Delta to compete with Guangzhou-based China Southern Airlines, the nation’s largest carrier.

Mr Kong added that carrier's financial performance in 2010 is expected to improve from 2009 levels, although no earnings estimates were provided. The carrier, which returned to profitability in 3Q2009 due to fuel hedging gains and a strong domestic traffic recovery, told Reuters it would focus on its cargo business to improve its financial results.

Air China, meanwhile, stated its H shares continue to be suspended as its controlling shareholder, China National Aviation Holding Company, contemplates the injection into the company of the state-owned capital operation budget that it has received. Air China is currently considering the arrangement in relation to potential private placements of its shares.

Boeing and Airbus emphasise the importance of the Indian aviation market

In the Indian market, Airbus and Boeing, at India Aviation 2010 Air Show, separately outlined the importance of the Indian market over the next 20 years, with Airbus India VP Sales, Miranda Mills, commented that “long term, the potential for growth in India’s aviation sector remains exceptional”.

Kingfisher Airlines’ shares gained 0.5% yesterday, as ULJK Securities stated Kingfisher is “looking pretty strong on the technical charts”, adding that Kingfisher shares are a “good buy”. ULJK added that it has a short-term target price on the carrier’s shares of INR57.50 and INR58, compared to the current level of around INR53.50.

ULJK added that “Jet Airways has gone up considerably”, but added, “I don’t think it is a good buy at this level”. In other Jet Airways news, the airline’s Chairman, Naresh Goyal, stated 2010 “will be better” than 2009, as the Indian carriers have all been rationalising their capacity. Shares in Jet Airways slipped 1.7% yesterday, while SpiceJet was also weaker, down 2.1%. 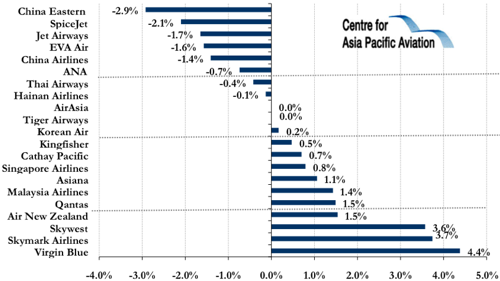