Air China's Board has approved another capital injection into troubled Air Macau. The Beijing based airline will contribute USD19.9 million to the share capital of Air Macau, increasing its shareholding in Air Macau from 51% to 80.9%. Air China’s shares were down 1.6% on Friday.

Also in North Asia, Korean Air’s shares gained 5.3% on Friday, the same day the carrier announced it would become the first Asian airline to order the passenger version of the new B747-8. The carrier ordered five B747-8s, for delivery between 2013 and 2015, joining an existing order for seven B747-8Fs.

American Airlines vs Delta in the battle for JAL

Also on Friday, Japan's Nikkei stock average closed above 10,000 for the first time in five weeks and rose 10.4% on the week, its largest weekly gain in over a year.

Qantas’ shares were down 2.2% on Friday. Subsequent to the share market close on Friday, Qantas stated Star Track Express remains an “important part” of its portfolio, despite reporting a 29% fall in net profit, to approximately USD17 million in the 12 months ended 30-Jun-2009. Star Track Express is 50% owned by the carrier, while Australia Post owns the other 50%. 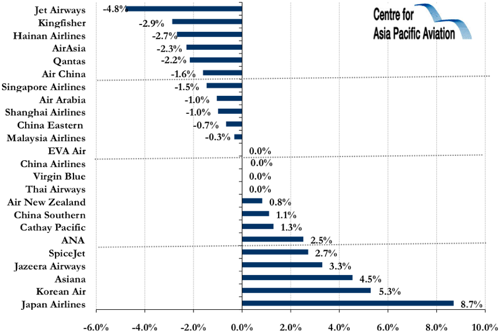