Air Canada (-0.9%) declined despite analysts at Citigroup upgrading their rating of the carrier’s stock from ‘Hold’ to ‘Buy’, also increasing the price target from CAD2 to CAD4. Citigroup cited a strong revenue environment, expected liquidity enhancement and a pullback in the stock. Despite 1Q2010 revenue just meeting the analysts' expectations, Citigroup identified a number of factors pointing to an improved revenue performance this year, including a rise in load factor for the quarter. The company also cited improving yields and WestJet's (+0.2%) expectation of unit revenue gains in 2Q2010.

Citigroup expects Air Canada to outperform the LCC this year. For FY2010, the analysts expect Air Canada to report earnings per share of CAD0.25, compared to a loss of CAD0.34 per share in FY2009.

Continental Airlines (+0.8%) and United Airlines (+0.6%) were both up yesterday. OAG released an analysis of the potential merger between the two carriers, showing the merger would create the largest airline in the world by many measures – airline revenue, available seat miles (ASMs) and revenue passenger miles (RPMs) – both within the United States and worldwide. Delta Air Lines (+0.8%) today is the leader in all of those categories.

On-time performance improves for US carriers

US Department of Transportation announced during trading that on-time performance for the nation’s largest airlines in Mar-2010 improved year-on-year and compared to Feb-2010. According to information filed with the Bureau of Transportation Statistics (BTS), the 18 carriers reporting on-time performance recorded an overall on-time arrival rate of 80.0% for the month, better than the 78.4% on-time rate of Mar-2009 and Feb-2010’s 74.6%.

Meanwhile, the carrier’s with the lowest rates included JetBlue at 72.1%, ExpressJet at 75.1% and American Airlines at 76.1%. 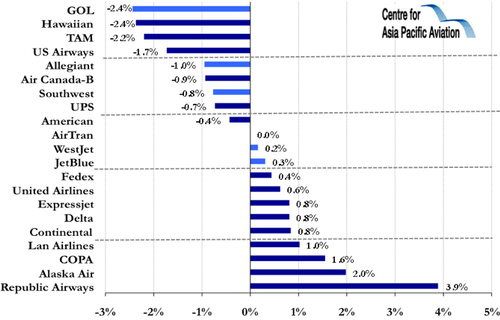