North and South American carriers stocks were mixed on Friday (26-Mar-2010), as was the wider market, as investors remain concerned over valuations and sovereign debt issues in Greece, Portugal and Spain. The Dow (+0.1%) eked out a gain, while the AMEX Airline Index (+0.7%) was slightly stronger, helped by a slip in oil prices (-0.2%), to USD80.35.

Air Canada (-5.0%) shares fell from a four day rally on Friday, despite CEO, Calin Rovinescu, stating during trading that the carrier is beginning to see stronger demand for cargo services, leading him to believe the economic recovery has commenced.

Mr Rovinescu also noted the carrier’s strong share performance since the start of the year, which he stated was the best among North American carriers. He stated, “we started from a much lower point. Last year the airline traded on...some of the cash and liquidity risks. Now that those are largely behind and we've started to see a rebound in the stock price”.

Raymond James analyst, Ben Cherniavsky, raised his price target for the carrier from CAD2.25 to CAD3.50. The carrier closed trading at CAD2.10.

Continental Airlines (-0.5%) slipped after announcing plans to lay off 150 ground workers at seven US airports in favour of hiring contractors, effective 01-Jun-2010. The lay offs will be at airports in Greensboro, North Carolina; Kansas City and St Louis, Missouri; Norfolk and Richmond, Virginia; Pensacola, Florida and Providence, Rhode Island.

America Airline Daily is your one-stop shop for news, data and analysis from the dynamic North American, Caribbean and Latin American aviation markets. Featuring guest articles from some of the foremost thinkers in the industry, America Airline Daily is designed to take your understanding of key issues and awareness of developments to a new level. Other stories featured in today’s AAD include: 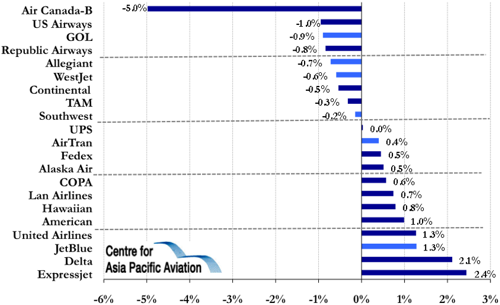