Air Canada: Edging back from the brink

After more than a year of serious brinkmanship to avoid bankruptcy, Air Canada reported a substantial narrowing of its operating loss in 4Q2009 to CAD83 million compared to CAD146 million in the year-ago period, an improvement of CAD63 million. 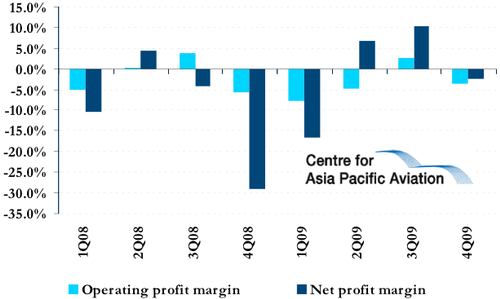 As with many of its US counterparts, it reported slowing passenger and cargo revenue declines in 4Q2009 compared to its first three 2009 quarters. Earnings before interest, taxes, depreciation, amortization and aircraft rent (EBITDAR) of CAD167 million increased CAD59 million from the same quarter in 2008. 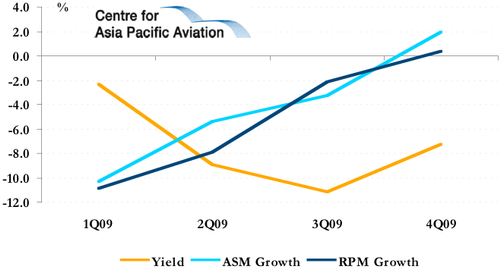 Premium cabin yield declined 7.2% from the fourth quarter of 2008. In 4Q2009, traffic increased 0.4% on a 2.0% growth in capacity. The impact was a 1.3 point decline in load factor versus the year-ago period. Meanwhile, system revenue per available seat mile (RASM) declined 8.8% in the period on a yield drop.

Canadian and Atlantic markets experienced the greatest yield falls, while transborder yields were better than the average thanks to more stringent capacity controls in that market. 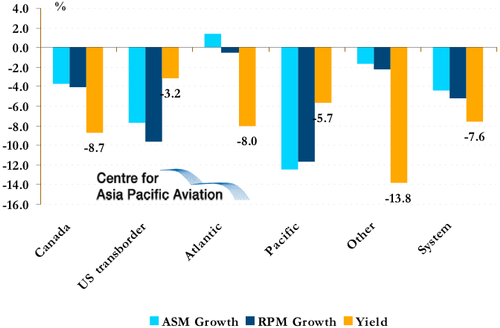 Having instituted its CTP programs, Air Canada was able to force an 8% drop in fourth quarter operating expenses totaling CAD213 million. It cited lower fuel prices and favourable foreign exchange as contributors as the value of the Canadian dollar against the US dollar was stronger in 4Q2009 over the year-ago period. This contributed to a CAD105 million to the reduction of operating expenses compared to the fourth quarter of 2008.

For 2010, its cost savings initiatives are expected to yield CAD170 million from contract improvements, including its amended CPA with Jazz. Another CAD215 million is expected from operational process and productivity improvements, while CAD115 is expected from revenue optimization. As a result of surpassing its 2009 target, it has increased its CTP target for this year from CAD250 to CAD270. It has already med CAD223 million of this year’s target and CAD256 million of the CAD500 million target by the end of 2011, on a run-rate basis.

Unit cost, as measured by operating expense per available seat mile (CASM), declined 9.8% from the year-ago period, while ex fuel CASM dropped 3.2% year on year in line with its guidance. It again cited the foreign exchange benefits along with reduced wages, salaries and benefits expense. However, the airline also reported a rise in aircraft maintenance expense driven by the timing of airframe and engine events in the quarter. Partly offsetting these decreases was a year over year increase in aircraft maintenance expense, primarily driven by timing of airframe and engine events in the fourth quarter of 2009 compared to the same quarter in 2008.

For fiscal 2009, Air Canada reported an operating loss of CAD316 million compared to an operating loss (before the provision for cargo investigations and proceedings) of CAD39 million in 2008. EBITDAR amounted to CAD679 million, a decrease of CAD255 million from 2008. Passenger revenues of CAD8.50 billion decreased CAD1.07 billion or 10%, including a fuel expense decrease of CAD971 million or 28%, from 2008. CASM decreased 5.4%, while CASM, excluding fuel expense, increased 3.3% consistent with guidance. Air Canada cited a weaker Canadian dollar as accounting for about 40% of the CASM (excluding fuel expense) increase year over year.

"Over the past year we have overcome tremendous challenges to begin 2010 with satisfactory liquidity, reduced unit costs and measurable customer satisfaction improvements," said President and CEO Calin Rovinescu. "We are now in a stronger position to manage through what is expected to be a slow start to the recovery for the sector. As I have said previously, airlines, especially those focused on the business traveler, are the first to be affected by recessionary conditions, and the last to recover as they wait for other sectors to fully resume business-related travel.

"In 2009, Air Canada outperformed the majority of North American carriers by recording one of the smallest reductions in full year unit revenue compared to 2008, despite the most difficult economic environment in decades,” he told analysts yesterday. “Through effective capacity management and the introduction of various initiatives to stimulate traffic and re-engage customers, we recorded strong load factors throughout the year.”

He said the company’s Cost Transformation Program (CPT), launched in mid-2009, was instrumental in achieving its 4Q2009 and year-end results. "We targeted CAD50 million in annual savings and cost reduction benefits for 2009, CAD250 million for 2010 and the full CAD500 million by the end of 2011 on a run-rate basis,” he said. “We are encouraged to have surpassed our 2009 CTP target by CAD20 million and remain on track to realize or exceed the 2010 and 2011 targets.”

With the stabilisation, he said, the airline can now turn its attention to the CTP, as well as generating new revenue.

Despite optimistic reaction from Wall Street on the results of US carriers, Rovinescu agreed with his US counterparts in saying the recovery will be slow. Its assumption also includes estimates that the Canadian dollar will trade at CAD1.06 per US dollar in 1Q2010 and CAD1.04 for the full year.

Roveniscu reported that management has six priorities for managing through the rest of the cycle with improving revenue and unit cost productivity. “We need to make CPT part of our DNA, said CFO Mike Reausseau.

Its second priority is leveraging international growth opportunities a task made easier with the A++ revenue sharing agreement struck by the Star Alliance with United, Air Canada, Lufthansa and Continental. It also launched codesharing with Continental and is even sucking Pacific bound passenger from the US east coast. Consequently, he said that it will grow its international footprint without adding fleet, something Air Canada does not want to do for the foreseeable future. All this affords the opportunity to capture more business.

He moved on to improving the quality of revenue by intensifying the focus on premium revenues. “We’ve held our own relative to the rest of the industry,” he said. Air Canada has been investing in the front cabin.

Its fourth focus in re-engaging with customers by having employees go above and beyond the call of duty on behalf of the passengers. Part of this is in empowering employees to do what needs to be done to meet passenger expectations. This leads in to the fifth and sixth priorities, a cultural change amongst employees creating a strong employee brand. He indicated that involved instilling in them a culture of entrepreneurship, a sense of ownership in the company. “Instead of managers we seek to have leaders and instead of employees we have ambassadors and this has paid off in six prestigious industry awards.

Sick and tired of Toronto Port Authority’s rulings against allowing Air Canada resume service at Toronto City Center Airport, he announced the company filed a lawsuit against the port authority.