It will be interesting to see how the DoT and the airlines react to the DoJ’s submission. Some revisions to the immunity applications are probable, to accommodate the DoJ’s concerns.

United has meanwhile disclosed it sold USD175 million in senior notes on Friday backed by its US aircraft spare parts, to boost its liquidity amid the downturn. American Airlines’ parent AMR announced it would sell USD520.1 million in ten-year notes yesterday.

Air Canada’s B shares fell 2.1% as the airline concluded a CAD100 million revolving loan agreement with Aeroplan. The loan replaces a Nov-2008 prepayment arrangement for air travel rewards purchased from Air Canada. Cash poor Air Canada has already made an initial draw-down under the loan of CAD79 million. 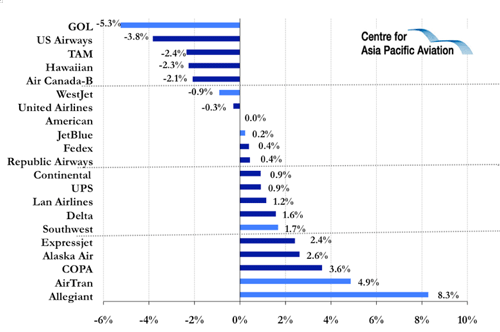