Air Canada (-18.5%) stocks tumbled following the carrier's announcement of plans to enter into an agreement with a syndicate of underwriters led by Genuity Capital Markets and TD Securities Inc to purchase 160.5 million units from Air Canada at a price per unit of CAD1.62 (USD1.53) for aggregate gross proceeds of CAD260 million (USD245 million).

Analysts at Research Capital Corp stated the agreement was “opportunistic” for Air Canada, as the carrier will obviously gain additional capital, which will lower its loss per share.

AirTran (-17.3%) stocks also took a dive, following its announcement on Tuesday of plans to offer, subject to market and other conditions, USD75 million aggregate principal amount of Convertible Senior Notes due in 2016 in an underwritten registered public offering. AirTran intends to grant the underwriters of the notes offering a 30-day option to purchase an additional USD11.3 million aggregate principal amount of the notes, solely to cover over-allotments, if any. 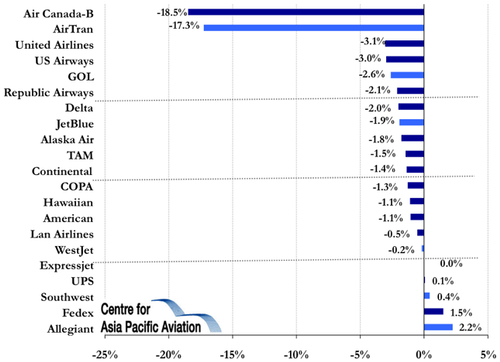