Air Astana, the largest airline based in the central Asian region, reported a net profit before tax of USD36.9 million for 1HY2011, a 10.4% increase over 2010 despite increased fuel costs and the airline’s expansion.

Revenue increased 18% in the period to USD346 million and passenger numbers increased 18.7% to 1.35 million. The strong result is impressive in light of a 34% increase in fuel expenses at the airline, but the sharp cost increase was matched by “robust revenue growth” across all markets, CEO Peter Foster said.

The first half result follows a record full-year result from 2010, when Air Astana reported a proft before tax of USD96.4 million, a 59% year-on-year increase. “It is hard to imagine how trading conditions could have been better in 2010, with costs for much of the year at post-recession levels but with substantially healthier markets from March onwards,” the CEO said at the time. “We don’t expect conditions to be so benign in 2011.”

Going forward, Mr Foster said the airline remains cautious for the second half, due largely to the impact of higher fuel costs and other inflationary pressures across much of central Asia.

In the first half, Air Astana commenced took delivery of two of its six Embraer E190s on order, which brings the airline’s fleet to 24 aircraft. The E190s will replace the airline’s ageing Fokker 50s and be used to develop Air Astana’s regional network, the airline’s best performing routes in the period. The E190s are being used to increase frequency on short-haul routes and feed the airline’s longer-haul services from Almaty and Astana.

Air Astana has also invested in its medium and long-haul product, with the installation of lie-flat seats in the business class cabins of its Boeing 757 fleet, which will be installed on its longer-haul B767-300ERs by the end of the year. To marks the significant improvements in sevice standards at Air Astana, the airline in Jul-2011 was awarded second place in the “Best Airlines in Eastern Europe” category of the Skytrax World Airline Awards 2011.

Air Astana still has four A320s and two A321s on order, due for delivery in 2013 and 2014. Air Astana has stated its future fleet plans centre around the E190s, which will support and expand the regional network, and the Boeing 787, which will presumably replace the B767s and be used on services to Western Europe, South East Asia and East Asia.

Despite its name, Air Astana maintains a larger presence at Almaty, the larger of the two cities and a larger industrial and commercial centre. It is dominant at both Almaty and Astana airports. Air Astana’s network from its Astana base is weighted towards regional and short-haul routes, whereas medium-haul services feature more heavily at Almaty. 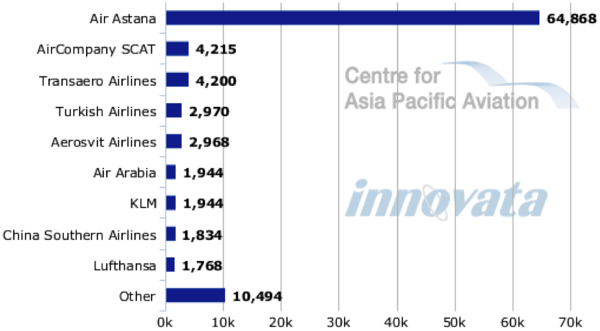 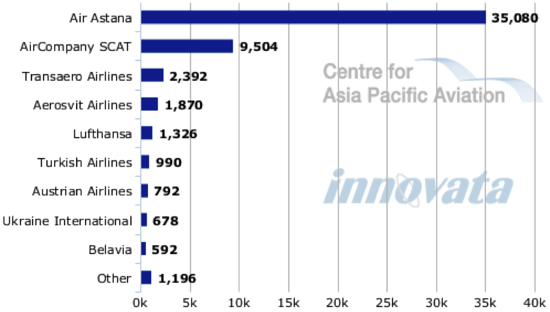 But the carrier’s largest route by far is its Almaty-Astana “shuttle”, which offers 16,870 seats per week. The airline operates over 50 weekly services on the route using a mix of Boeing 767, Boeing 757, E190 and A320 equipment.

Strong economic growth resumed in Kazahkstan in 2010 and although growth rates will moderate this year, the outlook remains strong for the country. With ongoing economic development and integration in the region, Air Astana is the best positioned carriers to tap into that growth and facilitate trade and tourism links between the countries.