Air Arabia (+2.0%) was the only Middle Eastern carrier to experience a rise in its share price on Thursday (29-Apr-2010) after the carrier stated it served more than 28,050 passengers on the Sharjah-Beirut sector, an increase of 7.2% year-on-year in 1Q2010. In 2009, more than 115,675 passengers were transported on the route, while the LCC reported 88% on-time-performance on the service. The carrier operates on the route ten times weekly.

Also in the Middle East, Kuwait National Airways was flat, as the Kuwait Stock Exchange gained only 0.2% for the day. Royal Jordanian Airlines (-3.5%) and Jazeera Airways (-1.8%) were down.

Lonrho and Kenya Airways were flat, despite the Kenyan All Share Index (+0.2%) rising marginally.

1time Holdings (-3.5%) was the only carrier to end in negative territory, despite a 0.7% rise in the South African JSE, which followed the US Dow Jones index higher. 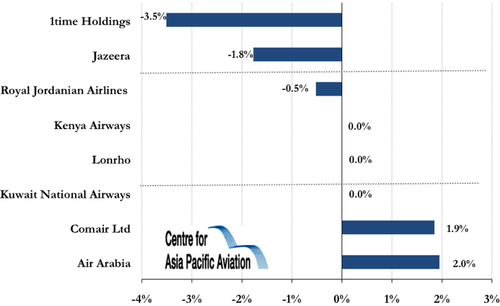