Air Arabia (-0.5%) formalised its order for CFM56-5B engines, to power its fleet of 44 A320 family aircraft. This new engine selection, originally announced in Jul-2010, will more than double the airline's CFM56-5B powered A320 fleet.

Wataniya Airways, subsidiary of Kuwait National Airways (-1.2%), announced the launch of its new premium cabin brand, BusinessFirst. It is being introduced on all routes from 01-Oct-2010 replacing the former first-class cabin brand.

Kenya Airways (-2.1%) rejected new pay demands from its workers' union that would cost USD4 million (KES325 million) more than agreed. The carrier signed an agreement with Aviation and Allied Workers Union (AAWU) in Apr-2010 to increase employee salaries, backdated to Oct-2009, at a cost of USD1.6 million (KES129 million). The union requests this be backdated by 15 months.

CEO Titus Naikuni had appealed to the Central Organisation of Trade Unions to intervene and ensure AAWU did not deviate from talks initiated when workers took part in a strike in Aug-2009. The strike action cost the carrier USD8 million in losses when 3,000 cabin crew, ground staff and engineers stayed away for three days, demanding a 130% pay rise. The two parties agreed a pay plan that included an interim wage award of 10% in each of the first two years.

Middle East and African shares were a mixed bag with 1time (-3.8%) down while Lonrho (+2.3%) and Royal Jordanian (+3.4%) shares gained. Meanwhile, Air Mauritius and Comair remained stable. 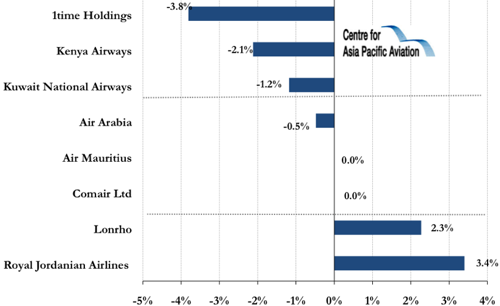