The majority of Middle East and African airline shares were down on Friday (12-Feb-2010), with 1time Holdings (+2.7%) the only carrier to close higher.

Royal Jordanian (-2.0%) shares were also down, but could gain today (12-Feb-2010), after the US Department of Transportation (DoT) proposed at the weekend to grant antitrust immunity to oneworld alliance members Royal Jordanian, American Airlines, British Airways, Iberia Airlines and Finnair, to form a global alliance. If the decision is made final, the oneworld carriers would be able to more closely coordinate international operations in trans-Atlantic markets.

Under the proposal, the airlines must agree to conditions to protect consumers and preserve competition. The DoT noted that the alliance could harm competition on select routes between between the US and London Heathrow (oneworld’s primary hub), due to the limited availability of landing and takeoff slots and proposed that the applicants make four pairs of slots available to competitors for new US-Heathrow services. The DoT would also require changes to the agreement to ensure capacity growth and require the carriers to submit traffic data and implement the proposed alliance within 18 months of a final decision. The DoT noted the proposed alliance would enhance competition around the world by creating competition with the existing Star Alliance and the SkyTeam alliance, which already have immunity. Interested parties have 45 days to object and answers to objections will take a further 15 days.

Elsewhere in the Middle East, Kuwait National Airways (-1.7%) was also down, while Jazeera Airways was flat. 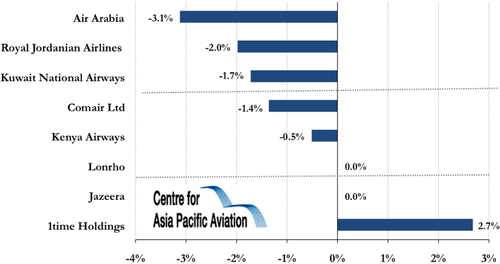