Air Arabia (+4.5%) made its biggest gain since Dec-2009 on Thursday (22-Apr-2010), after HSBC Holdings raised its rating of the carrier’s shares from ‘Neutral’ to ‘Overweight’. The analysts also raised its price target to AED1.15. The carrier closed trading at AED0.96.

Also in the Middle East, Jazeera Airways (+4.6%) also made a strong gain, as the Kuwait Stock Exchange rose 0.1%, in anticipation of 1Q2010 financial results. Kuwait National Airways (+2.0%) was also up as a result, while Royal Jordanian (+0.5%) gained marginally.

Elsewhere in Africa, South African Airways (SAA) announced a review of its SAA Voyager, cargo, Air Chefs and SAA Technical units by the Department of Public Enterprises, under a proposal to seek strategic investment into them. Deputy Director General for Transport, Andrew Shaw, stated the carrier has achieved a slow turnaround to profitability in the past 18 months and “quite dramatically” in the quarter ended Mar-2010 to generate a small profit. 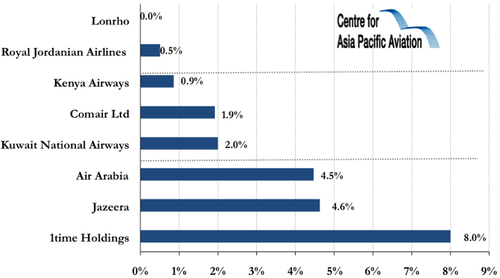