Air Arabia was flat despite announcing during trading that its Board of Directors approved the payment of a cash dividend of 10% for 2009 at its third Annual General Meeting. The carrier reported a 14.2% year-on-year increase in revenue to USD536.9 million and a net profit of USD123.1 million (-11.4% year-on-year) for the 12 months ended 31-Dec-2009.

RJ plans to launch Amman-Madinah service on 28-Mar-2010 and Amman-Bangkok-Kuala Lumpur service in Jun-2010 with A330 equipment. The A330 aircraft will also be operated on four times weekly Hong Kong via Bangkok, three times weekly Colombo and daily London services.

Elsewhere in Africa, 1time Holdings (+0.9%) also gained, while Lonrho and Comair were flat. 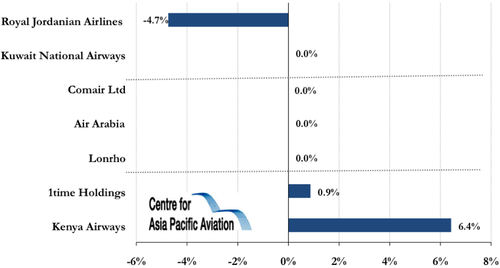