Aggarwal quits as SpiceJet CEO as the Sun rises

The CEO of Indian LCC SpiceJet, Sanjay Aggarwal, has resigned less than a month after Sun TV founder, Kalanithi Maran, acquired a 37.7% stake in the airline.

Appointed in Oct-2008 after Wilbur Ross invested in the carrier in mid-2008, Sanjay Aggarwal's departure will allow Mr Maran to install a new management team to guide the airline’s next phase of development, including its push into international markets.

According to CAPA’s Indian Airline Mid-Year Outlook, the recent acquisition of SpiceJet by Sun TV is likely to have a “significant impact” on the sector, adding, “the new promoters have capital, business acumen and political influence and are investing in a viable business model at an opportune time in the industry cycle, as Indian aviation prepares for a new and sustainable growth phase for the next few years".

CAPA expects the Board to shortly approve a new order for 47 aircraft and 47 options. See the CAPA report: Mid-year outlook for India's airlines: positive trading conditions

A successor has not been named, although there are reports the airline, soon to be renamed Sun Airways, could appoint an expat-CEO. Kishore Gupta, a board member of the airline, will be acting CEO. 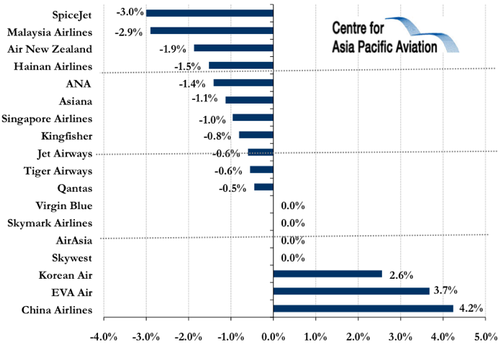 Source: Centre for Asia Pacific Aviation & Reuters
*It was a public holiday in Thailand and Hong Kong on 01-Jul-2010