Aerospace suppliers see transitional - but improving - 2010, growth to return in 2011

First flights of the A400M and B787 have relieved some of the near term pressures on the world's top two aircraft manufacturers, Airbus and Boeing.

Despite some forecasts of “brisk” commercial and military business in the new year, as customers move out of survival mode and move to replenish inventories, 2010 is still not expected to be easy. Airline passenger demand is still depressed, as are yields, particularly in premium segments, and a full recovery in either is unlikely to happen before the end of 2010.

Fitch Ratings agency still sees risks of outlook downgrades for some aerospace firms in 2010. The agency expects original equipment sales to continue to decline, but aftermarket sales are expected to improve “modestly”.

Goodrich CFO, Scott Kuechle, speaking to Reuters, stated 2010 would be a transitional year for the airline and aerospace industries, as conditions gradually improve. With aircraft utilisation rates and the supply-demand situation expected to return to more normal levels by the end of the year, the supplier is forecasting a return to growth from 2011. Rockwell Collins has a similar outlook, with CEO, Clay Jones, forecasting the return of “stable” market conditions by the end of 2010.

Meanwhile, EADS confirmed it is still potentially interested in “mid-sized” acquisitions in the defence sector in the US, looking at companies with USD300-500 million in revenue p/a.

Defence and government sales rose 4%, although sales to commercial customers were down 15%. Most heavily affected was AAR’s MRO business, which saw sales down 18% (to USD71.4 million) and grows profit decline by better than one third. Its aviation supply chain business also suffered, with sales declining 11%.

The Structures and Systems business segment reported a 7% increase in sales, and a 38% increase in gross profit, driven by “cost reduction and process improvement initiatives, favorable product mix and increased volume.”

David P Storch, Chairman and CEO of AAR, stated that the company achieved a strong quarterly result, “against a reasonably tough economic environment" and has increased its commercial MRO and supply chain market share through several new contracts, which should show benefits to the business in the next quarter. 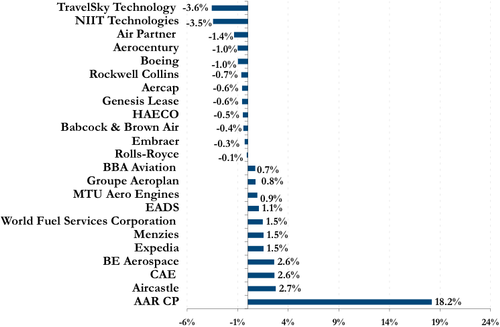