Unlisted Pulkovo Airport also stated its passenger traffic rose but by 22% in Aug-2010:

Spain’s ACS Group announced (16-Sep-2010) plans to submit a EUR1.3 billion takeover bid for all shares of Germany’s Hochtief AG (+5.6%), in which it currently has an ownership interest of nearly 30%. The group proposed the acquisition be paid for by means of shares at a ratio of eight shares of ACS for five shares of Hochtief, valuing Hochtief’s shares at EUR55.68 each, 1.1% less than their closing price on 16-Sep-2010.

ACS stated the exchange ratio is based on the average price of the shares in the two companies over the last three months. ACS also commented that it wants to increase its stake in the company to just above 50% “over time”, but not necessarily via the public offer. Hochtief stated (16-Sep-2010) it has taken note of ACS’ announcement and its Executive Board is evaluating the situation and will make an announcement with its response and advice to shareholders as soon as appropriate.

Other European airport operators to gain on Thursday included Zurich (+3.2%) and Gemina (+1.2%). 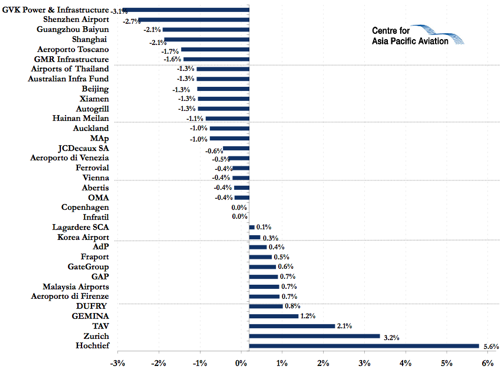