Aeroports de Paris’ shares fell 1.0% on Friday, despite reporting a 4.8% year-on-year reduction in revenue for the nine months ended 30-Sep-2009. The operator of Paris Charles de Gaulle and Paris Orly airports reported a 2.9% increase in 3Q2009 revenue, which was down from the +5.9% growth in 2Q2009.

The growth in revenue was the result of continued growth in aeronautical revenue (+6.6%), which saw ancillary and airport security tax jump 30.3% and 11.9%, respectively. Retail revenue gained 0.4% during the period.

Elsewhere in Europe, shares in Zurich Airport fell 1.5% in trading on Friday. The airport reported a 2.2% decline in commercial revenue (retail, duty free and F&B operations) in Oct-2009, a significant improvement from the -6.8% registered in the previous month. The increase was driven by a 3.2% increase in passenger numbers.

Italy’s Gemina, owner of Aeroporti di Roma, remained steady, after reporting stable net profit, at EUR7.2 million, for the three months ended 30-Sep-2009. Revenue fell 5.5% on the back of a 5.3% reduction in passenger numbers.

The group however, expects traffic to be in line with the previous year’s levels, whilst maintaining a cautious outlook.

In the Asia Pacific region, Korea Airport Service Co Ltd’s shares gained 0.8%. Incheon International Airport reported mixed traffic results in Oct-2009, including a 3.7% decline in passenger numbers while cargo traffic jumped 13%. The airport’s results are in line with the results by competitors in the region, including Hong Kong International Airport, which also saw a 3.7% reduction in passenger number. According to the airport, cargo traffic saw encouraging signs of recovery, registering a 1.3% increase in Oct-2009. 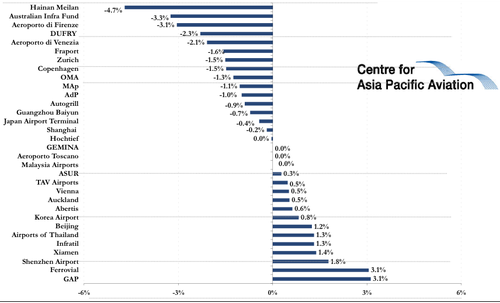