Aeroports de Paris (AdP) stated it has “made the assumption” traffic would grow by 0.5% in 2010, given a “more favourable outlook” for the coming months, following the closure of Paris-Charles de Gaulle and Paris-Orly airports in Apr-2010 due to volcanic ash shutdowns across Europe, with an estimated impact on 1.4 million passengers. Passenger numbers rose just 0.8% to 18.2 million in 1Q2010.

Also in Europe, shares in Italy’s Autogrill led the way up closing 6.1% higher. The airport services company reported a 5.7% year-on-year increase in EBITDA for the three months 31-Mar-2010 to EUR98.2 million, while narrowing its net loss to EUR9.1 million, compared with a net loss of EUR25.1 million in 1Q2009. Broker Equita upgraded Autogrill to “buy” following the release of its results.

The full financial and traffic report for Aeroports de Paris is featured in today’s edition of Airport Business Daily. Subscribe today for the latest financial/traffic reports and strategic news updates from airports worldwide. 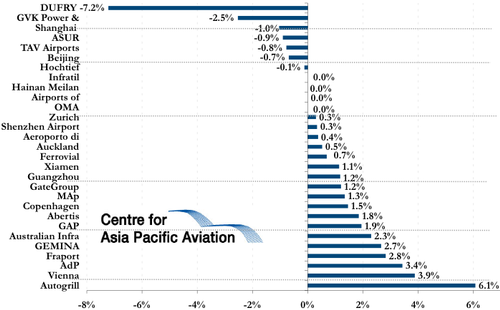